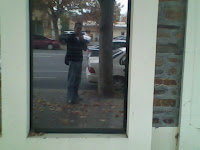 It's far too late to be sitting at the computer.
I am tired. I can feel sleep crawling all over me.
The night is another cold one. It's hard to believe that in a couple of months time we'll all be too hot at night.
I have just arrived home. Another opening, another show. We are over the hump now, five down and four more to do. My rendition of He'll Have to Go is being well received by the audience. Jim Reeves would be proud. I hope.

I bought some new jeans today. I have to return one of the pairs tomorrow. That's the downside of not trying things on I guess...
Jeans aside, the haul from my trip into the city was pretty pleasing. I bought two vinyl LPs - Icehouse by Flowers and UB40's Present Arms for $5 and $3 respectively. The Kids Are Alright DVD was going out for $10; too hard to resist. I also picked up one of those headset/microphone things from a cheapo shop, to make Skyping easier. The September Trad & Now was out, and I supplemented my reading matter with a bunch of mobile phone catalogues as well as the latest Stack.