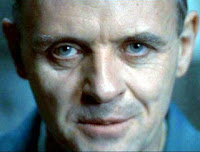 Over the past few days I have watched all of the Hannibal Lecter films. Some are better than others, but the concentrated experience of viewing them all (special features included) was a worthwhile pursuit. I watched them in a strange order that didn't follow the chronology of either the film releases or the central character. It made sense at the time...
I kicked off with Manhunter, the original, pre-Anthony Hopkins adaptation of the Thomas Harris novel Red Dragon. It was made in 1986, and is a pretty good effort. In a few small ways it is better than Red Dragon, made some 16 years later. I watched the 2002 version second. Overall it is better than its predecessor.
Silence of the Lambs came next, for many people the definitive Lecter film, and I followed up with the enjoyable, but overblown, Hannibal. Hopkins and Jodie Foster make the first film great, and it should come as no surprise to find that I agree with those who say it is the pick of the bunch.
I finished my marathon with Hannibal Rising, an OK film, but missing the vital ingredient that made the others, including Manhunter, so good.

A pleasant way to while away a few afternoons, helped along by a dish of fava beans and a nice Chianti. No liver though; I'm a vegetarian.