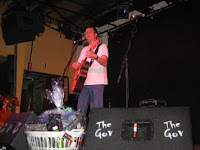 After playing in most of Adelaide's broom cupboards and telephone boxes, I can now add the big room of the Governor Hindmarsh to my list of venues played. It was a fortunate gig to land - I was asked to play as part of a charity bash. The major element of the afternoon was a quiz function, but they needed someone to play for 45 minutes as an opener to the festivities. Being the shameless whore for gigs that I am, I said 'yes' without hesitation. It was all in a good cause, and I'd get to play The Gov!
I knocked out about ten songs, thoroughly enjoying myself, watching heads bob, feet tap and a few furtive attempts at singing along as I played. I was now treading the same sticky boards that many of my favourite musicians had done over the years.
The gig was good fun on its own merits, but I am very happy that I now have something else for my curriculum vitae.
Rock and Roll. Of sorts...