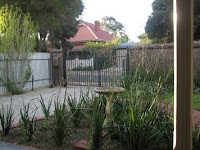 It's Thursday morning and I am sitting out on the front porch, reading. I've put in a good shift so far; the chores are done, I made bruschetta for breakfast (again) and I've had a quick rehearsal for tonight's gig. Now it's time to relax for a moment or two.
Two or three flies have taken an unhealthy interest in my cup of tea. They buzz the CPSU mug relentlessly. I can't concentrate on my book because I am worried about my tea. My eyes keep darting from the same sentence to the mug. Sure enough, one fly mistimes his flypast and flies into the drink. I whip him out immediately and wonder if the three-second rule applies, or if my cup of tea is ruined. He's on the ground, spluttering in boiling water, and my anger encourages me to smash him into oblivion with my heel. I decide, however, to rise above my base instincts and instead gently flick him onto the garden. I suspect he's a goner in any event. I drink the tea.
I haven't seen too many birds enjoying the birdbath in recent weeks. Maybe it's the heat, or maybe it's the presence of the cat that has taken to prowling the front garden of late. We are doing our best to discourage this feline interloper.
A hoon in a noisy car cruises past. Wraparound sunglasses, a year's worth of stubble, forearm hanging menacingly from the window, and a well-rehearsed look of uncompromising toughness. I suspect he thinks that this posturing makes him look more Scarface and less Cro-Magnon, but he's fooling nobody. What will these people do when all cars are silent? I suppose they'll get even louder car stereos...
Happy days.
The heat is coming. I can feel it.