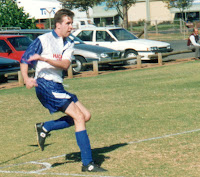 Holidays, cable TV and football. What a lovely combination.
I have sat in my armchair for a good few hours this week, watching football. I haven't played competitively for many years (see photo - a 'never-was' at work), so this is as close as I get these days. Beer, remote control, and Sky Sports.
The excitement of the English Football League Championship play-offs is reaching its peak. The gripping two-leg semi finals have been played over the last seven days, and I have been thoroughly absorbed. The Wembley final is on Saturday week and, at the final whistle, either Blackpool or Cardiff will be rewarded with a berth in the Premier League in 2010-11. Said to be worth around 100 million pounds to the successful club, it is not a match to be taken lightly.
The League One semi-finals are being shown next week. More nail-biting stuff.
This Saturday sees the Premier League's bankrupt wooden-spooners Portsmouth take on triumphant champions Chelsea in FA Cup Final. A classic top versus bottom encounter. Something magic could happen. Chelsea will probably win 8-0...
The Europa League Final was yesterday, with Fulham being defeated by Diego Forlan, and the European Champions League Final is May 22. Which happens to be the same day as the Football League Championship Final.
Late nights, early mornings, and comfort food.
And, of course, there is the small matter of the 2010 FIFA World Cup looming.