Sunday afternoon at the football 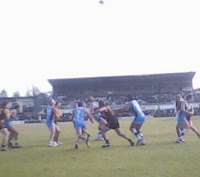 There's been a bit of a sporting theme going on here recently, and today was no different. I spent most of the morning catching up on the continuing noise and colour of the FIFA World Cup carnival, before heading out to watch my local Australian Rules team play. I have supported Sturt (the Double Blues) for many years, and they were playing Glenelg, away from home.
I caught the tram down to The Bay and was, as usual, looking forward to the afternoon. Win, lose or draw, I love going to the footy. It is such an effective release from some of the more serious aspects of this mad existence. It is a different, simple, slice of life. It attracts all types of people, all there for more or less the same reason.
I wasn't especially confident that The Blues would win, but I was hoping that it would be the case, as the season might well have depended on it.
I usually get to the ground in time to see the last part of the reserves match, adding another dimension to my football experience. Today was no exception, and the boys had their heads in front when I arrived.
I purchased a beer, located my match-going mate in our usual spot, and settled in. We chatted about the week's events, as well as our expectations for the afternoon. It was sunny and warm, surprising after the previous 48 hours, and a decent-sized crowd had turned out. We were surrounded by people only too willing to share their opinions on all facets of the game with anyone within earshot. I often wonder what some of these people do for the other six-and-a-half days of the week.
It was, unfortunately, a dark day for the club. Both Sturt teams, reserves and seniors, were beaten with the last kick of the match in their respective games. I doubt that has ever happened before in a serious, senior competition. What a miserable way to lose, and to torpedo your season.

That's what I call the Double Blues.

Oh well, I guess it's just football. I'll be back at the footy next week, as will Sturt.