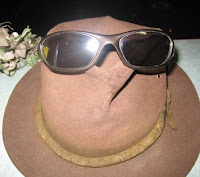 While I have been immersed in other things, it appears that Australia has a new Prime Minister. I had no idea things were so bad for Kevin Rudd. Worse now, I guess.
I don't draw too much inspiration from our so-called leaders. Don't be fooled, these people are in it for themselves. Politics is just a job, a business. None of them know what it is like to be hungry. Or cold. Most don't seem particularly bright. A talking hat could do a better job of looking after the nation's genuine interests.
I have been far too busy with important matters - music, football and beer - to have been overly concerned with politics of late.
It's all about priorities...

Written and spoken by D Robinson on behalf of the Tired Of All The Nonsense Party.