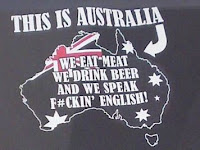 When I was younger, the prevailing view locally of our cousins in the USA was that they were a bit strange. The chest-beating patriotism, Ol' Glory proudly flying from flagpoles up and down the nation, and the every-day warbling of The Star Spangled Banner - no matter how minor the occasion. We never quite understood why all the hoo-ha was necessary.
It seems (to me anyway) that Australia is, thirty years on, moving down a similar path. The flag is displayed everywhere, a much bigger deal seems to be made of national holidays and national anthems. 'Australia - Love it or leave it' and 'F*ck off, we're full' t-shirts are worn with pride. If I never hear the odious term 'un-Australian' again, it will be far too soon. Do we really think that we have a mortgage on friendship, lending a helping hand, and fairness? Perhaps we could ask an Iraqi...
Don't get me wrong, I think that it is fine for people to be happy that they were born in a particular country. I don't mind at all. Some degree of recognition of where we have come from, and a measure of satisfaction that we, as a nation, are doing OK is probably both helpful and desirable.
I just think it's a bit odd that all of this flag-waving is happening here, within Australia. What are we saying? Who are we saying it to? Are we afraid of something? If we were a small enclave situated abroad, I could understand it more so. We might feel a bit better about being away by displaying a few reminders of home. But why do it when we are at home? I saw a similar proliferation of St George flags when I was in England in 2006, but I assumed that was because England had just achieved another inspirational failure at the football World Cup. Maybe it was down to something else...

Perhaps this is just a natural step in our national evolution. Oh well, let's see what the Republic brings.