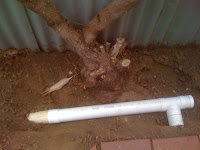 This doesn't look like a big job, but it was...
A few weeks ago, in my overzealous attempts to remove a meddlesome rose bush, I accidentally smashed my way through about a metre of storm water piping. I completely destroyed a three-way meeting of pipes, and tore holes through each of the sections.
It was the last thing I wanted to do - spend a day sweating and swearing as I attempted to repair the damage or, worse still, pay a plumber to do the job. Still, I'd made the error, so it was up to me to make good.
I took my time in thinking about the repairs, and planned, shopped and measured with care. I dug a hole, and I cut various bits of plastic pipe to exact measurements. Fitting the pipe was a tough job. Because the bulk of the piping was all still underground, there wasn't much give or flexibility, and the connections had to be as flush as possible. The remnants of the rose bush weren't helpful either, the roots were all over the place.
Whatever the situation, the task needed doing - it wasn't going to fix itself.
Ultimately, the job was completed by yours truly. I didn't swear much, didn't hurt myself, and didn't have to pay a plumber either. Maybe I'll get a song out of it. In your face, world.