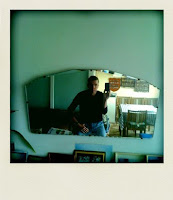 It's a rainy evening; Adelaide is experiencing a deluge. It's caused the cancellation of the Fringe Opening Parade, which is a bit of a downer for those involved. I am off to a Fringe show a little later on; hope it's OK.
I like the rain. In a practical sense it has been useful as a test of our repaired storm water pipes and, on a much more romantic level, it has added a pleasant dimension to my afternoon. I've been inside, jamming Beatles' songs with a mate and watching a Dario Argento film without ever feeling guilty about not being outside in the garden.
I used to watch a lot of horror films, something that I haven't done so much of in recent times. After today, I think it might be something I do a little more often... Good fun.