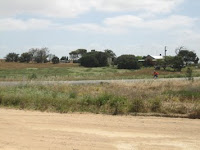 Probably the best thing I can say about the first two days is that they are over and done with.
Only 47 clicks on the first day, from Murray Bridge to Langhorne Creek, but it was tough. The first half was OK, in fact it was downright enjoyable, but once we turned right onto Wellington Road everything changed. Black clouds, and a wind straight from Hell. In a nutshell, it was probably the strongest wind I have ever faced. The only good thing about the gale was that it blew the storm just to one side of us.
To say I was relieved to make camp is an understatement.
We stopped at the pub, exhausted and sweaty, on the way in to Langhorne Creek so we could watch the running of the Caulfield Cup, and also to enjoy a very welcome pint. I asked the barman if he'd be willing to show the Manchester United v Liverpool match later that night. He said "probably", which was enough for me.
After the evening's entertainment, Ray and I staggered back up to the pub to watch United draw 1-1 with the rat-eaters. We got back to camp sometime early on Sunday morning...
When I was jarred awake by the sound of idiots talking loudly, I questioned the wisdom of staying up so late. Too late for regrets. It was another really tough day, 80 kilometres pretty much directly into a horrible headwind. South, straight down the Princes Highway, straight into the wind. For f*ck's sake. Anyhow, we made it, I survived. Then I had a beer. Or ten.