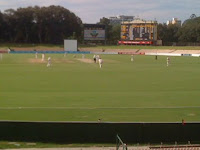 I finished up work a little early today and went down to Adelaide Oval, to watch some cricket. I wasn't particularly interested in the contest, it was more that I like the idea of sitting at the cricket on a warm afternoon and having a relaxing beer. Enjoying the therapeutic sound of bat on ball. Although, at $7 a pop, the two beers I had were something of a luxury and, quite possibly, a hardship to boot.
In front of a very small crowd (double figures at best), South Australia laboured to dismiss Western Australia, who ended up declaring with seven wickets down. The home team showed why they will probably struggle in this competition by losing their opening three wickets in the last half an hour of the day.

In any event, it was quite a meditative few hours. I sat in the Bradman Stand, reflecting on the week thus far, watching cricket, and counting my blessings. And my beers.