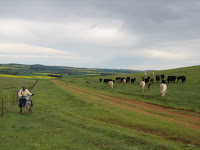 After clearing it with those in charge, we rode the Mawson Trail rather than the established bitumen route on Day Five.
And what a brilliant ride it was.
Initially overcast and rainy, the day's conditions improved as the hours passed. From the moment we turned onto Angus Court Road, I was filled with happiness.
I've ridden this leg about half-a-dozen times in the past, but always in the autumn. To do it at this time of year was something a little different. The canola fields provided an impressive backdrop to Camel Hump. We didn't stay long at the top of the climb as it was a little fresh.
It is fairly flat, but there a couple of pretty thick climbs and some joyous freewheeling sections too.
We got buzzed by magpies, saw kangaroos, felt a few spots of rain, encountered cows on the trail, waited while sheep were led from one field to another, and had to get over a couple of electric fences. Ray took a tumble in the mud, just for fun.
All in a day's work, really.

We were fortunate with the wind, which was across us at worst. The roadies' route meant that they had to endure a tough slog into it.
Gotta love those mountain bikes.

The Burra Hotel was pleased to see us.