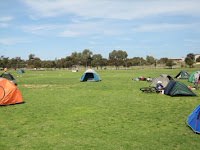 This is where I find out if two rides in ten months is sufficient training for a nine-day bike tour. I suspect I already know the answer...

I jumped off the Bike SA coach in sunny Moonta, set up my camp and got myself organised for the first day's ride. I said hello to many of my fellow riders, many of whom I've shared rides with at various times over the last eight years. After a quick lunch and an even quicker riders' briefing, it was time to head off. Here we go then!
Luckily, day one wasn't too arduous. We rode a triangular route which initially headed east from Moonta and took me to a couple of localities the existence of which I'd never previously been aware - Agery and Cunliffe - before arriving back at camp a couple of hours later. It was a fairly flat 47 kilometres, and wind wasn't really a factor. It didn't particularly hurt, which was a relief. The distance itself, though, was more than I'd ridden in 2012 so I was satisfied that I'd made it without tiring.

The evening was the time to reacquaint with old friends, and the Bike SA evening routine. I had a substantial feed, a couple of reds, and crossed my fingers in the hope that the next few days would be OK.

No turning back now.

www.bleakumbrella.com
Posted by David Robinson at 10:21 AM