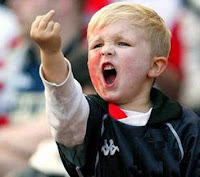 I went to the football today and, not for the first time, I walked away shaking my head. I was once again left wondering how people can act so poorly, so often. The noble arts of being generous in victory, and gracious in defeat, appear to be a thing of the past. Boneheadedness seems to be in the ascendancy.
I understand fully the passions that are aroused, both on and off the field, when a sporting contest takes place. I've won and lost with the best (and worst) of them, as a player, coach and spectator. I get passionate too, really passionate, but there's ways of dealing with it that don't necessarily include making an arse of yourself. Channeling base impulses into something more acceptable is part of our responsibility as higher-thinking social animals, surely. The way people react to things leaves me wondering what are they like when addressing the issues and challenges that confront them in everyday life. Not very well, I would wager.
People get louder, and ruder when they are winning, whinge when they are losing, and go quiet when a likely victory turns to defeat. Good-natured banter gives way to ill-reasoned offensiveness as soon as the going gets tough. The amount of aggression that most of these heroes expend is proportional to how far away they are from their perceived foe, or how well protected they are. People get personal when their comments are bested by another, and everyone can tell that they have lost the argument. Today I saw defeated players getting involved with spectators after the game had ended. What a nonsense. Probably the lowest brain cell to spoken word ratio known to humanity. There is almost nothing heard at a football match that is worth repeating. Even tabloid journalists are probably, just probably, more witty and incisive.
Lighten up guys. There's lots of things in life that are worth getting heated up about, but sport ain't many of them.
Be like me - internalise everything, and turn black inside. Nyuk!