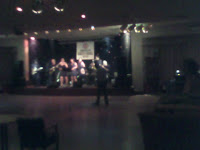 On Friday night we went out with friends to see a sixties-flavoured soul band. My kind of stuff. The gig was held at the Rolls-Royce Pavillion, which was a nice place to relax after a hard week of non-work. The band was called 'Godfrey's Grit 'n' Soul Band' and they played a load of soul classics, as well as tunes made famous by The Kinks, The Beatles and the like. All very enjoyable. The hard-working DJ was great too, sticking faithfully to popular soul tracks all night. I was having Quadrophenia flashbacks with just about every song...
One solitary chap danced all night, giving it some of the northern soul soft-shoe shufflle. He was occasionally joined by others, especially once the drink had kicked in.
The music was great, the ale was both tasty and healthy, and the evening ended too soon. We went home happy, and it was great to hear some live music done well.
Bravo!