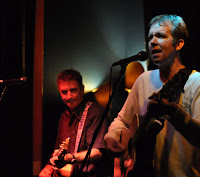 2009-2010 has been and gone.
In that time I have made over 60+ public appearances, and performed my original songs over 200 times. I've probably churned out somewhere in the region of 50 cover versions too, including an acoustic guitar version of Werewolves of London, of which I am extremely proud (to have survived). Warren Zevon, a true genius.
I have collaborated with other musicians, performed as a duo (Yours Truly, the fabulous Double Blues, and others), and made many new friends. I've continued in my role as a member of the SCALA Board; I have also put together and run ten or so Songwriters' Workshops. I have been lucky enough to have some of my music-oriented articles published in magazines and books.
I have added a Taylor six-string acoustic to my musical arsenal, and have assembled a decent enough recording facility. I've even started recording in it.

I haven't written enough songs. I haven't really developed as a guitarist or singer. I don't network, either personally or via the internet, well enough. But progress, however slow, has been made, and things have picked up in the last couple of months.

Where would I be without music?
In the nuthouse, I guess.