(Halfway) around the world in 40 hours. 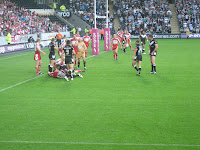 Arriving at our little hotel in Hull was like finding nirvana. Our trip had taken us around 40 hours to travel from Millswood to Hull. We were tired, becoming addled, and probably in need of a shower.
The Airbus journey from Singapore to Heathrow was OK - I was pretty shredded by the time we boarded so after enduring the staff's well-intentioned efforts to force feed me, it was a joy to put in the earplugs and sleep. I did quite well. Plane sleep isn't as good real sleep, but I was pretty much out of it for more than seven hours.
When I woke up I watched Stones in Exile, which was as good as I hoped it would be. I filled in the rest of the time with junk comedy shows.
Getting out of Heathrow was a breeze, and the National Express coach ride was pretty easy - not many passengers, and we made a new friend. A very pleasant chap called Peter, from Huddersfield.
We got our wearying bodies to Hull in time to check-in, shower, change, eat, have a pint before it was time to head out for our first adventure - the Rugby League local derby between Hull FC and Hull Kingston Rovers.
And what a good night it was!

www.bleakumbrella.com
Posted by David Robinson at 2:07 AM