Our fourth show was out at Chelmsford and we'd hired a couple of cars to get the band out there. The roads were busy, we were totally reliant on the sat nav, and it was drizzling. I was a little apprehensive.

The outward journey took two and a half hours; 50% of that time was spent stuck in slow moving traffic. Oh well, at least we had time for a nice chat...
The gig was in a small venue called The Asylum and it was built into a railway viaduct. The folks who ran the place seemed very pleasant and greeted us on arrival with a free pint.
It was a decent enough venue although it was pretty small. Unfortunately it was upstairs and not particularly easy to spot. And it was a very warm room.
We went out to have a look at the town but there didn't seem to be that much to see where we were. A few of us had pizza for tea. Some of the others had what only could be described as a heart attack on a plate... 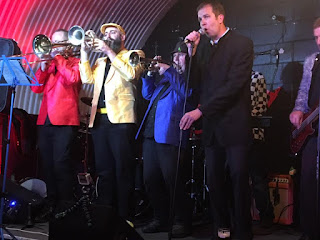 We were supposed to be the headline act but, with a long journey home expected, we asked the local support band if they minded going on last. They didn't.
Professionals to a fault, we put on another no-holds-barred show, much to the delight of the modest audience (basically the other band and a few locals). I sweated right through my shirt, it was boiling on stage. We all worked hard to shine like diamonds.
After the show we watched the other band put on a decent show for a while, but decided that we ought to make the long journey home before the night got too late.
I was relieved to get back to Croydon, a much quicker trip, and we spent a few hours relaxing and reflecting. Guitarist Peter and I stayed up into the early morning, drinking wine and giggling away like 12-year-olds.
And I got an Asylum t-shirt!

www.davidrobinsononline.com
Posted by David Robinson at 1:41 AM