Kipper Tie and a Butter Pie

PlanB's London adventure was followed by a trip to England's second city, Birmingham. Despite the distance, it was just over an hour away by train.
Collectively, the band didn't have any great expectations of the two-day visit; we were booked to play one show in a small bar outside of the city centre, on a Tuesday night. I couldn't imagine the line to get in stretching around the block.
We arrived without any drama around Monday lunchtime on the direct train from London. It was a pleasant, sunny day. We were lugging our gear from New Street station, in the general direction of our digs and, who did I spy? Jim Paterson from Adelaide's BordererS, leaning against the wall, eating his lunch. Not only was he a long way from home (as were we), but he has the same name as our fab trombone benefactor. The world gets smaller every day. We had a bit of a chat before continuing on with the baggage.
The hostel accommodation was OK; our double room was pretty good but I'm not renowned for my fussiness. I'm not sure that everyone's room was as nice as ours. 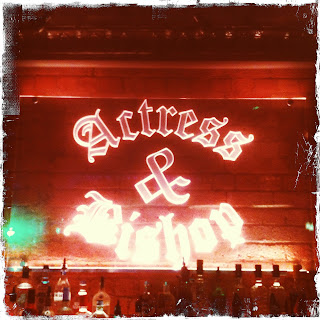 The venue, The Actress & Bishop, was actually OK; a few of us spent the Monday afternoon there, sampling the ales and checking out the ambience. Bass player Pete went off to undertake a pie-eating challenge, after visiting one of Kevin Rowland's old addresses with superfan Neil. I had a great meal in the Italian place across the road from the pub. Gnocchi and gorgonzola sauce, if you are at all interested...
After doing a bit of shopping in the morning, we appeared on BBC Radio Birmingham during Sunny and Shay Grewal's show on the afternoon of the gig. The interview went pretty well. Not quite as witty as The Beatles but we had our moments.
The gig was beset by the usual issues. Only half a drum kit for Dave, no working amp for guitarist Peter... We were getting used to this kind of nonsense and, once again, it was sorted out at the eleventh hour. The show also had an odd feeling about it because our keyboard player, Adrian, had taken ill and needed to spend a couple of nights under observation, and therefore missed the concert. Performance-wise, we tried to plug the gaps but our thoughts were understandably with him.
In any case, we still did a sterling job as far as the small but interested crowd were concerned. We met some good folks; some who'd planned to be there and some who'd just heard the music and come on in. Including a couple who were over from Australia. Everyone I spoke with had enjoyed the show, and the pub put on a few beers for the band. 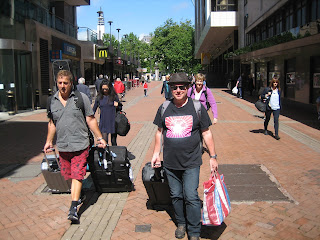 www.davidrobinsononline.com
Posted by David Robinson at 8:33 AM