Next we were out to Leytonstone on the train/underground for a Friday night show at a place called Luna. We weren't sure what to expect - were we back on the toilet circuit or would this one be something special? Most of the band had arrived before us and the looks on some of the faces didn't fill me with optimism. No drums for Dave, in fact no gear at all, no-one seemed to know anything... This was becoming the norm.
Of course, it all eventually got sorted out and we went to the local Wetherspoons for a beer and something to eat, relatively happy with the situation.
Showtime. It was a "pass the bucket around to pay the musicians" deal, which the staff did a few times, and the money was pretty good. Because there wasn't a stage as such, we were free to roam around a bit; something the horn players and myself took great pleasure in doing.
The Friday night crowd loved us, playing on street level obviously helps to bring people in, and the venue manager was really happy. So happy in fact, that he offered to pay our cab fare home if we'd play longer. So we did - no mad dash to the station required! We dragged a couple of covers out, and repeated a few songs from our first (of three) sets, and played until nearly midnight. Singalongs, beers, dancing and fun. 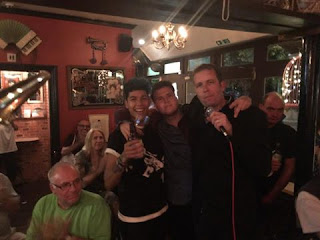 After the show, we hung around chatting with folks; the manager was particularly keen to talk about how he'd enjoyed the show. He was a great bloke. Not only did he pay for the cabs home, he topped up the bucket with some of his own cash. 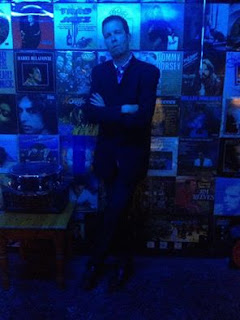 The drive home was pretty easy and we (once again) stayed up for a while, celebrating our continuing adventures.

The remainder of our London stay involved the usual things: catching up with friends, enjoying a few beers, window shopping in Carnaby Street and its environs, wandering along the Thames, drinking coffee at Bar Italia in Soho and generally just being a tourist. On Sunday we watched and listened to my friend Pete as he provided the piano soundtrack for a Charlie Chaplin short film. Once Pete had finished his shift the three of us visited Gordon's Wine Bar, reputed to be the oldest in London. Then it was on to the India Club for a feast.
Frankie says Relax!

www.davidrobinsononline.com
Posted by David Robinson at 4:57 AM