After a couple of days spent locked in intensive rehearsals, and also including a characteristically chaotic session on the crazy Mr Scurf's Koast Train FM radio show, PlanB's first performance of the tour took place at The Cluny in Newcastle.

The gig was opened by local hero and Lindisfarne legend, Steve Daggett. Not a bad support act! It was just him and his guitar (with a little bit of harmonica and stompbox), and he was great. We got to chat afterwards and, apart from liking his music a great deal, I was also taken by the pint holder he had attached to his mic stand. He told me where I might get one. He also gave me a copy of his album; I can't wait to listen to it.
The other band was pretty groovy too: The Pat McMahon Trio. Good lads playing good music; a kind of late-sixties electric blues vibe.
Our turn came and we were introduced to the modest crowd by long-time friend and supporter of the band, Mr Scurf.
The gig was a belter. Our first performance of the tour and we pretty much nailed it. The biggest challenge was not clattering into each other on the smallish stage. The punters were into the music, and so were we. Like most good gigs, the time flew. We'd been working towards it all day and it passed by in a flash. Afterwards, we caught up with friends old and new, and had a beer and a chat.
Back at the house, the merriment continued into the small hours. 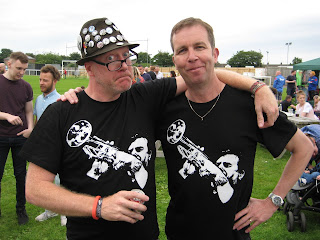 On Saturday, we were booked to play a 5.30 spot at the Woodhorn Lane Music Festival, at the home of Ashington CFC (Bobby and Jackie Charlton's club). We caught a couple of big cabs to take us there and we arrived around lunchtime. Some of the bands were hella-loud and we wondered how we'd go down with the increasingly inebriated crowd. No problem. We just did our thing and they loved us. Women appeared on stage and started dancing, my tambourine took various excursions through the crowd, and Mr Scurf toasted his way through 'What's On Your Mind?' with north-eastern aplomb. It was lovely chaos. At one point I yelled out "Toon Army!", much to the merriment (and approval) of the audience. Gan crackers, all of us!
A little lad called Callum had befriended me along the way, ever since Peter, Dave and I enjoyed a lunchtime kickabout with a spare ball we found. He wanted something to remember his day so I got all the band to sign a setlist for him. By the end of the show he'd buggered off. Callum, if you are out there, I have a memento for you...
We hung around after our show for a while, once again catching up with folks.
Another good day, and another good show. Definitely worthy of another long celebration back at the house.

www.davidrobinsononline.com
Posted by David Robinson at 2:37 AM