London. The capital. Occasionally swinging. Full of history, expensive beer, tourists, and tat. And quite a bit different to both Wallsend and Bridlington.

Another share house; a bit more nicely appointed than the last, and the 12-person touring party was doing pretty well managing a dozen different approaches to cooking, eating, sleeping, rising, washing etc.
We played three shows in London; two were fantastic and one was perhaps a little low-key, but an enjoyable experience nonetheless.
Our first gig was at the Fiddler's Elbow in Camden Town. This is a great London venue and has hosted many great acts over the years. We caught the overground and underground out to Chalk Farm (changing at Balham) to get to the gig; an adventure in itself. The venue was empty when we got there but that wasn't surprising as it was barely 5.00. A few of us had friends coming along so by the time we started, the place was pretty busy, with PlanB fans everywhere. 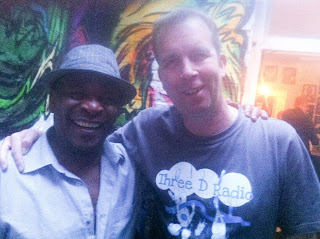 Earlier in the day, our trombonist, Patrick, discovered that he'd left his instrument on the train the previous evening. Luckily for PlanB, long-time friends of the band, Sandra and Big Jim Paterson (Dexys) were able to not only come to the show, but lend Patrick a trombone for the duration of the tour. Brilliant, lovely people...

It turned out that the other three local bands had very few folks come to see them, and we had pulled the bulk of the crowd; not bad seeing as we'd come from the other side of the planet. Thus, we got paid while the others may have missed out. The Fiddler's Elbow is one of those classic venues that you hear about but have no idea how small they are until you get there, a bit like the Hope & Anchor back in the early 1980s. 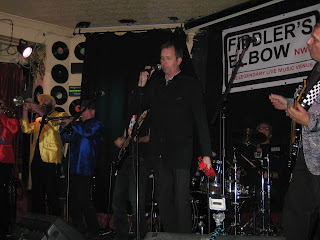 The gig went well; I sensed that we were hitting our straps. Not bad for the third date of the tour. The punters were into it; we put on a solid show, and most would have liked us to play on. But, we were part of a strict running order, and we had to stop after our allocated set length.
The only slight dampener was that, in order to make our trains home all the way to Waddon, we had to leave immediately after the gig. Even then, it was a bit of a madcap Hard Day's Night-style dash to the station. But we made it, and in some style. We were on a high all the way home, and well into the small hours.
Job done.

www.davidrobinsonononline.com
Posted by David Robinson at 12:05 AM