After the long trip from Wales and a well-earned sleep in, we awoke to find ourselves in the weirdest, most interesting house. It certainly didn't sleep 12 people comfortably; there wasn't really enough dedicated rooms or beds. Still, most of us managed to sleep in relative comfort. The "Hemp Lime House" was full to bursting with the most amazing array of stuff - artifacts from exotic places, homespun artwork, books, strange furniture and junk. It would be a great place to spend some time, albeit in a smaller group.
It was a pleasant summer's day, and we spent the morning taking in the joys of the delightful Cotswolds town of Stroud. Markets, charity shops, sunshine, and brunch in Greggs. 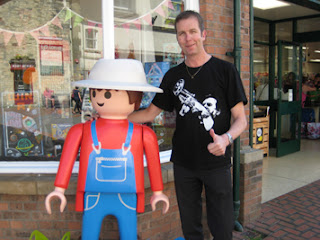 Hopes were high for Lakefest; it has a decent reputation and some of the acts that have appeared in previous years made us feel a bit special. Billy Bragg, The Selecter, Ocean Colour Scene, Embrace, Ash, Buzzcocks, Levellers and The Beat have all played the festival. 2016 was offering Primal Scream, The Coral, Starsailor, Secret Affair and, erm, PlanB. Well, "Plan Beat" actually. We had to change our name in the advertising because the organisers were a little nervous about people getting confused with the English rapper Plan B. So it goes.
It was an easy trip out to the festival (no police, no speeding tickets) and the venue, Eastnor Castle Deer Park, looked beautiful. On the hillside across the river giant letters spelling the word "LOVE" filled me with happiness. There were people of all ages milling around, there was a cornucopia of food and beverage choices, and the sound of music filtered through the air. 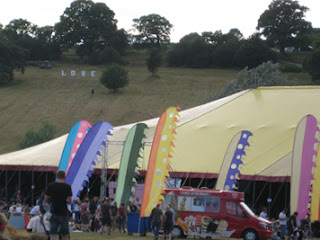 We wandered around, soaking it all in, and checking out the various tents and stages. Spirits were pretty high, and we ate and drank merrily as we saw the sights. I bought a t-shirt, to add to my growing collection.
We were scheduled to appear late, after Primal Scream, so we were hoping people would spill out of the main stage, looking for some more music, and find their way to us. We were on in the Real Ale Tent, which also doubled as the "BBC Introducing" tent during the afternoon. 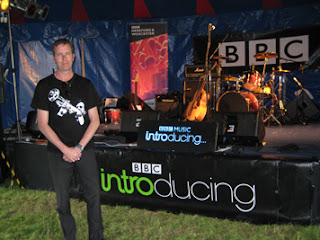 One of the great bands of my youth, Secret Affair, were playing early in the evening and I went along. I was surprised there wasn't a bigger crowd but no matter, it meant I got to stand right at the front without any of the usual crush. They were great; it was quite a moment to see and hear 'Time For Action', 'Let Your Heart Dance' and 'My World' live on stage. Ian Page's  voice is still pretty good and the band was tight. It took a couple of songs to get the mix right but once that was done the overall sound was great.
A little later I went along to see Primal Scream do their trippy, loopy thing in front of a huge crowd. It was a proper festival show and Bobby Gillespie was in decent form. They played old and new stuff and it all sounded pretty groovy, no matter which version of the band you prefer.
A little later in the evening I saw Nick Parker and The False Alarms over on another stage. I can't say I'd heard of him/them before but they were really good. Something else to research when I get home.
Man, I was looking forward to playing.
The ska band that played in our tent directly before us had done a decent job getting a few numbers, despite the competition from the main stage, and I was hoping they would stick around. Unfortunately, they did not. The organisers shut the bar in our tent, which didn't do much to attract punters, and by the time we started we were playing to about 20 people, while hundreds of others drifted by outside, on their way to their tent, car or oblivion. A bit of a downer after such a good day, but we shone like diamonds in any case. We played our set, and my night ended chatting with Jo and Ian (The Filthy Spectacula), nice folks both of them.