Staying late at The Office...

The day of our Swansea gig arrived and I started things off with a visit to the Dylan Thomas Centre. It was pretty cool, and I learned a fair bit too. I followed that with a stroll around the marina and the beach. I took it pretty easy as I had one eye on the approaching performance, and my responsibility to my public. Ha ha.
Guitarist Peter would be arriving in the afternoon from Liverpool, where he'd been to see 'About the Young Idea' -The Jam exhibition - and the rest of the band would arrive closer to gig time in the rented cars.
After a few sociable afternoon beers with Rob, Peter called to say he'd arrived and to find out where we were. We told him. Half an hour later, he still hadn't shown up. Swansea isn't that big. Eventually, after many wrong turns and asking the wrong questions of locals, he and his guitar appeared outside the pub. He'd given himself quite a tour around town.
The other guys arrived after the long drive from Stroud and we slowly moved into performance mode. None of us seemed to be particularly enthusiastic about the show and I wasn't convinced that The Office, a heavy rock venue, would offer us anything in the way of a boost. The crowd and the support band, although really nice folks, also added to the sense that we were soulful fish out of water. I think the notion of a two hour early-morning motorway drive back to the share house was also weighing heavily on my mind. I thought we'd bomb; I had visions of the Blues Brothers' chicken wire concert! 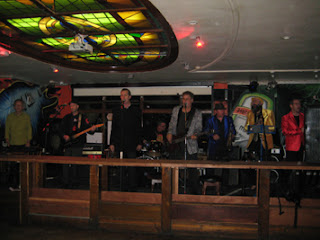 Of course, all of this negativity proved baseless. The gig turned out to be fantastic. We put on a decent show, the venue was great and the locals loved it. People were coming in off the street, and there was plenty of dancing. Audience members were into our songs, and the inclusion of Dexys' 'Plan B' was an inspired choice. I was a bit frightened at one point; one of the local lasses appeared to have taken a shine to the beanpole lead singer and was applying the glad eye from very close proximity. I was trying to flash my wedding ring at every possible opportunity.
After the show, the mood among the band members had lifted somewhat, but there was still an air of tetchiness in some quarters. With a dozen people, no home comforts and so much travel, and every day requiring significant planning and execution as we continually ventured into the unknown, I guess it was never going to be sunshine and lollipops all the time. 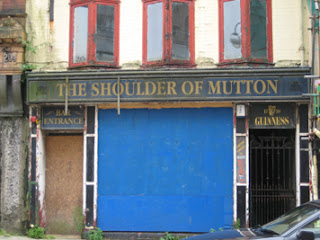 We chatted to folks and enjoyed a few free beers. Not too many though, we had a long drive ahead.
On the way home to Stroud, Patrick drove with great care and skill. The motorways were virtually empty. We got pulled over by the police for driving in the middle lane (who knew?) but they were good blokes, especially when they realised we were just dumb tourists. We also got done for speeding about 100 yards from home but that's not important right now. It was just nice to get there, sometime between midnight and dawn.

Posted by David Robinson at 8:30 AM