We left the beautiful environs of Cambridge, somewhat reluctantly, in the relative calm of the sunny early morning. I think we managed to get the entire touring party, and our gear, into a convoy of four taxis. Friday's mission was Glasgow or bust!
We arrived at the train station hoping for a no-fuss travel day. The first leg up to Peterborough was fairly easily managed, for most of us. The notable exception was Patrick. He'd bought/used the wrong ticket, and was slung off the train the first stop out of Cambridge!
What we hadn't reckoned on was the increased number of train passengers headed north, due to the opening of the Edinburgh Fringe. Subsequently, the train to Glasgow from Peterborough was heaving with people. Because the train was jam-packed and there were no available seats, most of us were left standing. It wasn't so bad; I just watched the English countryside glide by, alone in my thoughts.
Somehow, Patrick had turned up and made it onto the correct connecting train at Peterborough. Nobody is quite sure how. I'm guessing he used his super powers.
I eventually got a seat at York. So did most of the others. 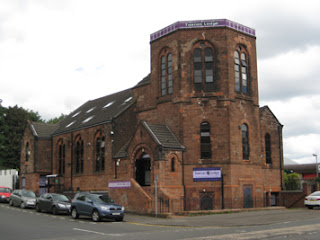 Arriving in Glasgow, after some more of the fun that a 12-person decision-making model provides, we made our way on foot to the Tartan Lodge, our home for the next few days. It was next to the Glasgow Royal Infirmary, around a half-hour walk from the station. Our room was nice enough; some of the folks who had opted for dorms were less pleased. The rooms were fairly ordinary, by all accounts. The biggest issue appeared to be that the wi-fi was crap. Probably still better than being robbed (or worse) in your sleep, or catching something nasty from the mattress. First world problems, I guess...
Five of us enjoyed a large, cheap and cheerful Thai dinner delivered to the accommodation, on the recommendation of the friendly chap behind the reception desk. I got some curry sauce on my Radio Caroline t-shirt which made me a little grumpy. Another first world problem.

Our one and only Scottish gig, on the Friday night, was at The Scotia, reputed to be the oldest public house in Glasgow (although there was another place around the corner boasting the same thing). The pub was just down the road from the Clutha Vaults, a music venue that was the scene of the tragic police helicopter crash in 2013. It has only recently reopened. At The Scotia, we were shoehorned into a corner but at least the required gear was there, courtesy of JonZip (new friend and top bloke). I had no idea how we were going to make it work, such was the confinement, but we found a way. The horn players stepped forward when it was their moment, Adrian sat his keys on one of the tables, I took the odd trip down the inside of the bar so I could sing to the people at the front and, in summary, I think we went off!
People were digging the music, and loads of folks came up for a chat between sets and after the show. Someone put my tambourine to good use (again) throughout the second set, although I had to ask for it back before we played any of the slower songs.
I was starting to get the feeling that you could put this band in almost any venue, and in any situation, and we'd somehow make it work. That's got to be a good thing.
And I got another t-shirt, thanks very much...

On Saturday morning some of us took a stroll around the markets before I left to find my way to the Glasgow Rangers match. After four seasons in the relative wilderness of the Scottish lower divisions, they were back in the big time and fans were eager for the new season to get underway. I fancied going, and I'd been told that it would be easy. I found the subway that would take me to the ground, only to find it was closed for four weeks! I asked and got directions to Jamaica Street, where I would find a bus to take me to Ibrox Stadium. I met a nice fellow on the bus and told him my story, and asked where the ticket office was. He told that the match was a sellout! Oh well, at least I could walk around the perimeter and soak up a bit of pre-match action. As it turned out, after a few attempts I found someone selling a spare ticket outside the ground and managed to see the match in all of its fervent atmosphere. I walked home in the afternoon drizzle with a few thousand of my new best friends.
Rob the trumpet, Dave the drum, Peter the guitar and Lynn & I spent the evening in one of the local pubs, talking bollocks. A perfect end to a good day.