After a very enjoyable stay in Scotland it was difficult to get back into travel mode. Our next gig was a couple of days away, in Swansea, and a few of us headed straight there while others took the time to visit different locations.
The Tuesday morning train was late getting into Glasgow which caused trumpet player Rob, Lynn and I to miss our planned Swansea connection at Crewe. It meant we would be late into town but we weren't too bothered. It was a travel day with not much planned at the other end. The most difficult aspect of the day would be the humping of our cases, which were gaining weight at an alarming rate.
On the Crewe-Swansea train, Rob and I had a few beers, and chatted with an older woman who made up the foursome in our little enclave. She was on her way to Hereford to be with family and, I think, quite enjoyed catching up with us, dipping her toe into the murky waters of the rock and roll lifestyle. I helped her with her bag when she got off, doing my bit for Anglo-Australian relations.
After travelling through three countries, I was happy to get to Swansea, and happier still that the hotel we'd booked was immediately outside the train station. Minimal luggage lugging!
Rob went off to find his accommodation before rejoining us for a quite enjoyable meal and a few beers in
the hotel bar. I was pretty tired by the end of the evening and made no secret of the fact that I was looking forward to a proper sleep in. 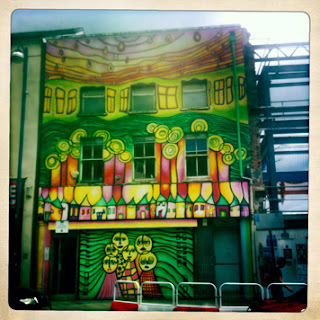 Of course, that didn't happen. A bloody fire alarm jolted me from the deepest sleep at 6.30am and there was no returning to the land of nod.
Lynn and I wandered around the town, starting off with a lovely breakfast of scrambled egg and baked beans. We visited the castle, and did some shopping. I went into a great little record shop where I managed to resist buying any vinyl, and I grabbed some stickers for the guitar case. Lynn bought cakes. We swapped messages with the other guys in the band, seeing what they were up to (and where), and we checked out the location of the gig venue.
That night it was burgers and beers in a Yates pub with Rob, before the place turned into a nightclub for what seemed like all of Swansea's twenty-somethings. On a Wednesday night! We popped over to The Office, PlanB's venue for the following night, for a quick look and a pint. It looked a lot like a heavy rock venue.
I slept poorly, the streets were full of (twenty-something) revellers letting me know what a great night/morning they were having.