The last weekend of the PlanB UK Tour was spent at the delightful Retro Festival in Newbury. We spent the Saturday and Sunday there, arriving directly from our Friday adventures at Lakefest. The Retro Festival is an annual gathering of folks celebrating the golden era of mods and rockers, and just about any other element of pop culture from the middle of the last century. There were big old American cars, classic British motorcycles and vintage scooters all over the place.
The sun was out; it felt like summer, and I think we were ready to sign-off in style. 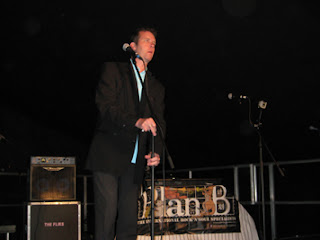 We had two gigs to play; one on Saturday night and one on Sunday at noon. A bittersweet notion, because with only two shows left it meant that the great music we were making would soon be over, however, all things must end and it would be refreshing to be in a different routine after almost a month of touring. We were scheduled to appear on the Ricky-Tick Mod stage, and we'd be a little bit different to the usual offering of northern soul and ska bands. Both of which I took in whenever I could over the weekend.
The festival was situated on an enormous plot, with plenty of space for music, vintage cars, merry-go-rounds, aeronautics and, erm, miniature steam engines. We were directed to our accommodation, which took the form of a couple of very nice looking tents. Welcome to the wonderful world of glamping! Three of the couples used one of the tents, while the rest of the gang took up residence in the other. There was also another tent for our domestic use,  featuring electric power, a fridge, water etc. All very nice. 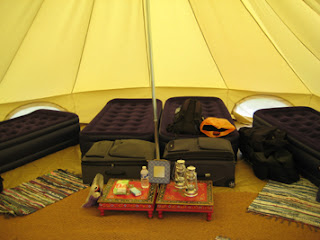 I bought a few vinyl singles, including the original 'It Must Be Love' by Labi Siffre. Peter Guitar bought Arkeology, a great set of World Party rarity CDs; I think most of us did a little shopping.
After playing quite a bit over the previous three and a half weeks, we'd grown in terms of our musical togetherness so we were expecting to put on a good show wherever and whenever we played. Of the two, the Sunday lunchtime performance probably enjoyed bigger numbers, but both gigs went down pretty well.
Here's a story I posted elsewhere:


So, it's Saturday night at Retrofest and we've just finished our set. I'm out the back, completely spent, trying to catch my breath.
This geezer sits next to me.
Him: "Are you on tonight?"
Me: "Just been on mate; knackered. What about you? Playing tonight, or are you a DJ?"
Him: "I'm on later. I'm a singer, Chris Farlowe's the name."
Me: (surprised) "You don't look much like your pictures..."
Thankfully we got past that dopey comment and had a decent chat; mainly about the fun of being a constantly busy musician. We would have talked longer but we were out of time...
This is certainly a world full of surprises. 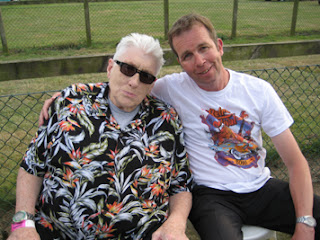 After that I wandered off and found a friendly felafel for my tea.
Some of us went to watch Chris Farlowe on the Saturday night and he still does a great job with 'Handbags and Gladrags' and 'Out of Time'.
The Sunday gig was a kind of celebration, being the last gig of the tour, and we all supped whisky from Peter's flask before we went on. Nice.
The afternoon was spent sitting in our deck chairs outside of the tents, eating and drinking to our collective heart's content. A few of us had gone on a £100 food and beverage run so we had plenty to get through.
Some of us were leaving the camp to stay in Reading that evening so it was with a somewhat heavy, but affectionate, heart that we all hugged, shook hands and said goodbye a little later that afternoon.
Pete the bassman dropped us in town and, that was it, no more tour. Peter Guitar, Rob Trumpet, Lynn and I shared a few drinks that night before parting company the following morning. 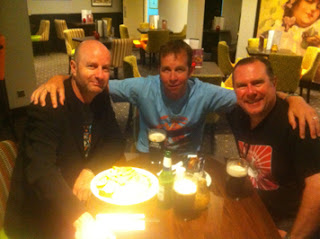 Within days of the tour ending the eight members of the band were scattered all over the world. From the north of England, to the USA, to Greece, to Australia, to a cruise chip in the Mediterranean, the PlanB diaspora was massive. Rock and roll!