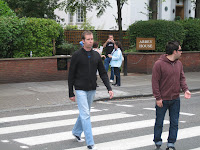 Late afternoon in London. As we were wandering around St John's Wood, it occurred to me that we might not be far away from Abbey Road Studios. A quick look at the map confirmed this but, as we rounded the next bend, it became obvious that looking at the map had been an unnecessary effort. The place was teeming with people; all ages, all nationalities, and all kinds of cameras. All intent on capturing a perfect shot of themselves, but impossible, as there are simply so many people. We joined in the fun, and after a few attempts Lynn captured a pretty crappy shot of me making the crossing, to go with the pretty crappy one we took in 1998.
My advice to anyone wanting to get a really good shot is to go down there at dawn.
It was nice to walk down the road though; over the zebra crossing and past the studio, reading the graffiti along the way. Made me feel like a Beatles' fan!