In the footsteps of John, Paul, George and Ringo. And Brian. 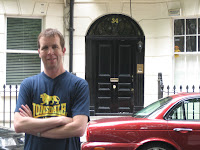 On the weekend we took a wander through the streets of London, seeking and (mostly) finding Beatles-oriented landmarks. On Saturday we visited Manchester Square, the site of EMI House, where the iconic photographs of the boys looking over the balcony (twice) were taken. We also saw Ringo's leased flat in Montagu Square, where John & Yoko photographed their Two Virgins cover, and also were busted in 1968. The Apple Shop at 94 Baker Street was a disappointment, as it was shrouded in scaffolding. We finished off with a visit to Marylebone Station, one of the locations used in Hard Day's Night.
On Sunday we visited Chapel Street, and saw the house in which Brian Epstein lived (and died). It is also the place where Paul met Linda. From there it was on to The Beatles' flat in Mayfair, and we also visited the Apple Corps building in Savile Row - the site of the rooftop concert. We went to Trident Studios, where Hey Jude was recorded on 31st July 1968. Some of the tracks appearing on the The Beatles and Abbey Road were recorded here. Our final destination was the flat where Paul McCartney sat in the attic and composed Yesterday.
What a great way to spend time in London!