End of the island 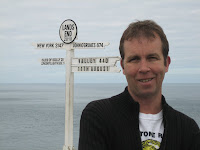 The persistent drizzle had passed, but the skies were still a cheerless grey, when we woke on Wednesday morning. We were hopeful of some sunshine, at least for the later part of our day, as we headed for Land's End - the western-most point of the Great British island.
We caught an open-topped bus and sat up top for our trip, enjoying the bracing breeze, and the views, as we motored along.
Land's End is part-amusement park, part-natural history, and part-national curiosity. For whatever reasons, it certainly is a popular place with visitors.
We had a bit of a wander, taking in the scenery, and looking for good place to take a photograph or two.
We walked, we had a look in the shops, we had a pint (well, you can't come all this way and not have one, can you?) and then we walked some more. We saw the commemorations of those who have made the epic Land's End to John o' Groats trek, and saw memorials to a couple of people who had died on their bicycles while attempting the journey. Sad, and probably no fault of their own.
So, another tick in the box. Land's End, done.
The open-top ride home was very pleasant, and a bit warmer.

www.bleakumbrella.com
Posted by David Robinson at 1:31 AM