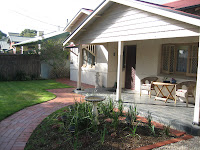 We emerged, tired but not defeated, from Singapore Airlines flight SQ 0279 around 48 hours ago. The intervening period has been, understandably, a bit of a blur. I refused to surrender to the jet lag, and immediately upon getting home we were tidying, cleaning and washing. We mowed the lawns and straightened out the gardens.
I'd avoided hearing the Manchester United score so I was able to watch the replay in a pseudo-live environment. The good guys beat Newcastle comfortably. Welcome home David.
I went out to the open mic and performed on Tuesday night. Probably not the most sensible decision but I was keen to play, and catch up with friends, even if I was only partly there...
Yesterday was better, but still a little unreal. We had to go down to Port Adelaide and I had the opportunity to browse the shops for DVDs, as well as do some grocery shopping.
I made puttanesca for tea and it came up pretty good. We enjoyed it with some mustard bread and washed it down with a glass of two of red.
In the evening I sat down with the excellent Sky Sports commentary team and watched Day One of England v Pakistan from The Oval. It's hard to believe that a little under three weeks ago I was sitting at Trent Bridge, watching the Second Test...
There's still quite a bit to do around here but I imagine that I will be in front by the time the weekend arrives. Here's hoping anyway.

www.bleakumbrella.com
Posted by David Robinson at 8:38 AM