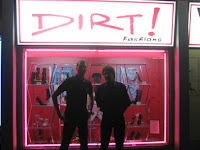 Back in May, I reunited with my good mate Ken for a weekend of Yours Truly gigs. Ken was in Adelaide for the Alistair Hulett Memorial Fund concert, and we decided to make the most of his four days in town.
On the Thursday evening we caught up, said hello, and had a quick rehearsal just to make sure we remembered the songs. Then it was into the cars and down to Higher Ground to play a short set of originals as part of a SCALA performance. Luckily we know enough of each others' songs that we are just about proficient without the need for lengthy rehearsals. Things happen so quickly in the the Yours Truly universe that any kind of rehearsal is a rarity. The gig provided a great launching pad for the weekend.
On the Friday we journeyed down to Red Brick recording studios. After playing as a duo for a few years now, we figured that it was probably time to commemorate our union and do some recording together. We had a great day, recording eight songs under the guidance of Anthony Stewart, studio supremo. We hope to have the first Your Truly album out before Christmas, with a sneak preview song appearing on the next SCALA CD.
This was another of our whirlwind weekends as we played gigs at The Ambassadors Hotel, The SA Folk Centre, and the front bar of the Governor Hindmarsh. All the shows were different, and we had a great deal of rock and roll fun. The Alistair Hulett concert was a bit special, and I was very happy to accompany Ken through the set of Hulett classics.
We just about had time for a quick pint after the Sunday afternoon show at The Gov before Ken had to make his way to the airport, and beat a hasty retreat back to Sydney.

www.bleakumbrella.com
Posted by David Robinson at 7:17 PM No comments: