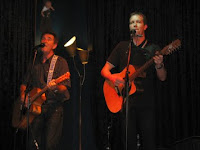 www.bleakumbrella.com
Posted by David Robinson at 11:32 AM No comments:

Music, beer and some of life's other essentials 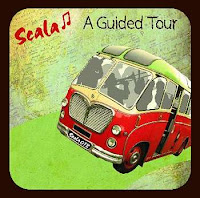 Going back to work has, unsurprisingly, punched a big hole through my erstwhile daily level of productivity. Throughout the course of my lengthy leave period, I had all the time in the world to manage my life. Every day was more or less my own. Not any more. Since returning to the life of a wage slave, my challenge has been to not slacken off in any areas, so I have been very busy in the evenings and on my days off.
I have performed a few times, most weeks, playing gigs of all sizes and styles. The most notable of the recent shows was the launch of the latest SCALA album, A Guided Tour. The album features one of my songs; it is my 15th CD release. Not too shabby, especially when I remind myself that I was the wrong side of 30 before I made my first appearance on disc.
The home brew has come up well. I sampled my first bottle late last week, and I have since demolished a few more. It will improve over the coming weeks and months. If I can leave it that long. It's nice to be back in the fold.
I have been grappling with new (and old) technology around the house, riding my bike, preparing for Christmas and keeping an eye on the vegetables. The kitchen will be filled with tomatoes very shortly.

There's no time to get bored.

www.bleakumbrella.com
Posted by David Robinson at 8:04 AM No comments:

We are the army 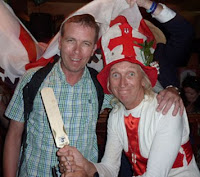 My time at the cricket was thoroughly enjoyable. From the moment I walked through the Phil Ridings Gates on a glorious Thursday evening, I knew I was on a winner. I was there to attend a Lord's Taverner's function, featuring the oratory skills of Sir Ian Botham and Ian Healy.
I got to meet and shake hands with Sir Ian, after he had finished regaling the audience with tales of Ashes battles old and new. Beefy is in pretty good shape and, unlike Ian Chappell, I don't think I'd be keen to take him on in a car park stoush.
I met some great people over the course of the five days, both in the stands and up on the hill in the Barmy Army. Some local, some from 12000 miles away. It almost restored my faith in humanity. Almost...
Adelaide Oval is a beautiful place to watch cricket - I hope those members who have an eye on further "development" of the ground remember how magnificent it is right now. Commentators and spectators alike are united in their praise of the visual splendor of the oval and its environs.
The evenings in the pub were brilliant. Hundreds of people, mainly men, singing, dancing and enjoying a drink or three. And not a sign of trouble, no matter how bladdered folk were. The only overly aggressive behaviour I witnessed in the whole time was that of one of the bouncers, who was obviously bored and looking to kick something off. I guess they have a tough job sometimes, but this lad was probably out of his depth, and a smartarse to boot.
The cricket was exciting from the very first over, and was a great advert for the long form of the game. We lost some time due to bad weather, but England still managed to wrap up the match with a few sessions to spare.
The Tuesday afternoon/evening session was big. Getting to the pub at lunchtime, accompanied by the glow of victory, meant for a long day in the saddle. I paid for it on Wednesday.
As I type, it looks like the series will be all tied up going into the Melbourne Test Match on Boxing Day. How I would love to be there!

www.bleakumbrella.com
Posted by David Robinson at 8:07 AM No comments: 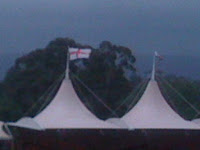 www.bleakumbrella.com
Posted by David Robinson at 8:40 AM No comments: 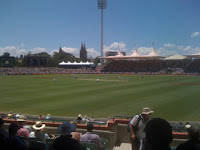 The first two days of the Adelaide Test Match have followed a similar pattern. An early start and a line up at the gate has ensured a shaded seat in the Members' section - an absolute must in these sweltering conditions. Pakoras and samosas have been an inspired breakfast choice. The first beer has usually presented itself around noon, and the pace has been reasonably gentle, but on a steady rise in frequency, in terms of consumption. I've spotted Nasser Hussain, Graham Trott and James Anderson wandering around, and shared my immediate vicinity with pleasant people, in the main.
The atmosphere at the ground has been great, and cricket has been equally impressive. Especially in the eyes of England fans. The game should be England's for the taking, but I fear that the weather will rob either team of pushing for a result. We shall see.

www.bleakumbrella.com
Posted by David Robinson at 6:51 AM No comments: