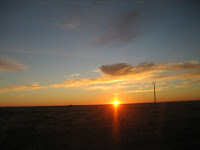 ...A thin band of orange creeps across the horizon. The day comes. Venus and Jupiter, the two brilliant planets in the eastern sky, begin to fade. Their time has come and gone.
I am already showered, shaved and dressed. I slept OK, but rose early.
In the red lounge car, it's just me and one other. Everyone else is clambering for heart-starting coffee in the next carriage.
I say "hello" as I pass my fellow traveller and he replies with an eastern European-flavoured salutation. He begins to cough. And cough. The sort of cough you are rewarded with after smoking a packet a day for fifty years. I think he might be about to die, but he just keeps coughing instead. The coughing only stops once he's used the communal sink in the refreshment spot as a spittoon. Nice.
Three shows yesterday; pretty much three and a half hours back-to-back. Rock and roll.
And the world races by...

www.bleakumbrella.com
Posted by David Robinson at 5:13 PM No comments:

All manner of things...

It's been a busy few weeks for this ol' boy. A few gigs here and there, with most going well. Writing, recording, playing, composing, admin (oh the admin!) - there just aren't enough hours in the day.

The first train trip worked out fine, and I am off again tomorrow for another Cody Pomeray-style jaunt to Sydney and back on the Indian Pacific. Well, at least that's how I like to think of it...

Last Monday I finished my recording of Wish I Was You for the next SCALA CD. I recorded it at Rob Pippan's studio and it has come up a treat. A nice heavy sound, without being too big; a bit of a departure from most of my recent studio efforts. I hope listeners enjoy it.

I've been tidying up my own home studio; my dream is to turn it into a small space that I can spend hours in, immersed in good vibes. Shabby Road Studios, the place I wanna be.

I haven't been to too many gigs, but I did get to see Steve Poltz for a second time. Shame it was the same night as Ralph McTell's last-ever Adelaide concert but I'd already organised the Poltz gig. I did pick up some Ralph McTell vinyl the other day though, as a sort of compensation. Three albums, all mint condition, $3.95 each. Plus I bought The Runaways' Queen's of Noise vinyl through eBay.

I had a poem published in Spur Magazine, and have been entertaining notions of self-publishing a book of poetry. Vanity, anyone? Perhaps that will have to wait for a little while. My write-a-song-each-month challenge is going OK, but I need to do some more work there.

This weekend I have a gig at the Daniel O'Connell in North Adelaide and I am also part of a Battle of the Bands judging panel. But I'll get the train ride out of the way first...

Posted by David Robinson at 9:34 PM No comments:

I'm sitting in the lounge car, having enjoyed two cups of tea and a rather joyous sunrise. There's a few other folks dotted around the carriage, all trying to act normally in this slightly surreal environment. I haven't had much sleep. It was a rockin', rollin' ride for most of the night.
As far as my location goes, I'd say I was somewhere northwest of Menindee.
I've just heard that we were delayed in the night so we'll be late into Broken Hill and only staying for 20 minutes. So much for an early morning constitutional.
My shows have been well-received, and I've actually enjoyed the performances much more that I was expecting. I can feel, though, that I am getting tired; a good sleep tonight, in my own bed, is something to which I aspire.

www.bleakumbrella.com
Posted by David Robinson at 7:42 AM No comments:

Here I am, in Sydney again. Grey and wet.
The weather, not me.
The CFMEU are demonstrating, I'm drinking coffee while I catch up on a few things, and the world is turning.
I think I'll have a look in the markets, that will keep me dry. The colour, the industry, the irresistable tat... There's a pretty good book store up the road too. Lunch with Ken in an hour. A meeting of the Yours Truly brains trust. I wonder what we will come up with?
Back on the train at 2.30, and back to Adelaide. Singing for my supper, as it were. I ended up doing two shows last night; the late gig was a hoot. Made me miss breakfast though.

www.bleakumbrella.com
Posted by David Robinson at 10:48 AM No comments:

Just a brief stop on the way to Sydney. It's been an interesting trip so far. This afternoon's groovy gig was sandwiched between stints in my train cabin, where I rehearsed and relaxed.
I watched the state roll by, turn into New South Wales, and tonight we climb over the Blue Mountains on our way to Sydney. But not before I give another performance...
I thought I'd pop into The Musicians Club in Broken Hill, and see a wealth of music-related ephemera displayed on the walls. Maybe get my picture taken next to a life-sized statue of Jimmy Little or something. Not a chance. The place was filled with pokies and eateries. No sign of music anywhere, unless you count the annoying jangling of the machines as music. I certainly don't.

www.bleakumbrella.com
Posted by David Robinson at 6:29 PM No comments:

Into the wild grey yonder.

A new adventure, saluting the collective spirits of Jean-Louis Kerouac, Samuel Langhorne Clemens and Woodrow Wilson Guthrie.
This time tomorrow I will be in Sydney, and this time on Thursday I'll be home again. Six performances in front of me.
I've never been to Broken Hill before. Hope it's not midnight there when the train stops.

www.bleakumbrella.com
Posted by David Robinson at 10:42 PM No comments: