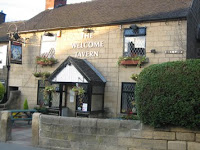 Over the last week or so, I have been regularly reminded about the times we have spent it England over the last few years. It must be the weather. Perhaps the Adelaide autumn throws up similar patterns to the early English summers to which I have become used.
At various stages of any given day, perhaps when walking to work through the parklands, riding my bike in hilly areas, sitting/playing in pubs, even when shopping, I have been spirited away to Derbyshire.
Walking home through Wayville the other day, I was half-expecting to come across The Welcome Tavern, where I might pop in for a pint. Of course, this type of little suburban pub doesn't exist here in Adelaide. I'll have to travel 12,000 miles to experience that particular pleasure.

www.bleakumbrella.com
Posted by David Robinson at 7:51 AM No comments:

One night in Hamburg 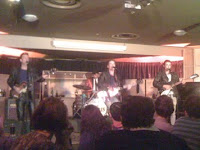 My last show for the 2011 Fringe was the curiously named Beatle Soup, a performance given by Adelaide's Fab Four, down at The Cavern Club on North Terrace.
I went with another Beatle nut, and I think it's fair to say that we had a good night. Most of the songs selected for performance were appropriate, and the performance of said songs was also pretty good.
It was a bit of stretch to see mature men playing the teenage Beatles, but it didn't take me long to get past that. It was a bit of theatre, and it is the closest I will ever get to sitting in the Kaiserkeller in 1960, unless someone buys me a time machine...
The set list went something like this: Besame Mucho, Three Cool Cats, Some Other Guy, Roll Over Beethoven, Money, Be-Bop-a-Lula, Act Naturally, My Bonnie, Slow Down, I Saw Her Standing There, Hippy Hippy Shake, Twist and Shout. (Cheers Stewart for having a better memory than me). 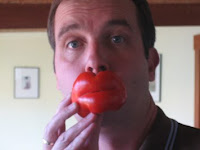 Our garden has been very good to us this year. The mild summer has helped no end - all of our crops have benefited from the lack of 40 degree days. Tomatoes, sadly now almost finished, have been rolling in since just after Christmas. We've feasted on eggplant, capsicum, apples, peaches, garlic, basil, beetroot, figs and chillies. We generally eat everything we grow, but there's usually extra to either freeze or give away to friends and family.
It's been great. We currently have our autumn seeds and seedlings in, and I am looking forward to the challenge of growing food through the winter.
The proof of the vegetable garden is in the eating!

www.bleakumbrella.com
Posted by David Robinson at 6:18 AM No comments:

I went to see Sydney ska outfit Backy Skank last night. I was looking forward to my evening; stumbling across ska music back in 1980 was a great moment personally. The music, the look, the attitude - it was all so fresh and exciting.
The band played loads of songs I expected to hear, and a whole bunch of stuff I'd never heard before. I assume they were the band's originals. They were part of a four act show, comprising some high-energy ska and some meandering reggae.
I wondered if anyone else I knew from back in the heady days of One Step Beyond and More Specials would be there. I usually see vaguely familiar faces at these type of gigs. Sure enough, I'd not been there too long when a chap approached me and began the process of working out where he knew me from. Out came all the familiar names, the venues etc. I certainly remembered him from somewhere, but couldn't quite attach his face or name to any specific adventures. He was probably an older/younger brother, or a boyfriend, or someone's mate who wasn't really into the whole mod thing...
A little later I said hello to someone I haven't spoken with for 25+ years. I'd seen him dancing (something I just don't do), and made my way over a little later on. We'd both had a couple of pints, and it was a very nice feeling to renew acquaintances with an old Vespa riding mate. Small world. Nice to see you again, Steve...
Happy days.

www.bleakumbrella.com
Posted by David Robinson at 7:40 PM No comments:

Best of the Beatles

Tea time on Thursday, and my long weekend stretches out before me. Fringe shows and their attendant reviews aside, I should have a bit of time to play guitar, and work with my latest batch of recordings. I'm trying to whip some live recordings into shape, but I don't want to detract from their natural sound. It's an interesting process. If nothing else, it is helping me get a better understanding of my recording studio software.
I heard an interview with Pete Best today. What an interesting life, in terms of extremes. That whole Beatles thing must cast an enormous shadow. Kicked out of the band just as they started recording for Parlophone. Was it jealousy from the others, the fact that he simply wasn't a particularly good drummer, or something else? He says he's not bothered now. And why should he be? The Beatles Anthology recordings made him a millionaire! Nevertheless, I ordered his latest CD today, and paid real money for it. Maybe I still have a little sympathy for the Liverpool lad who fell at the last hurdle, all those years ago.

www.bleakumbrella.com
Posted by David Robinson at 5:12 PM No comments: