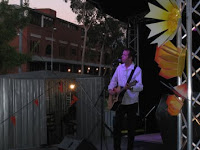 I took my 2012 Fringe bow on Thursday, when I did my thing at Shimmering West as part of SCALA and Higher Ground's Fringe performance showcase.
In the days leading up to the gig, I felt flat and low, and I'd just about convinced myself that I didn't want to play. Grumpy and knackered, a lovely combination. The mood prevailed right up until the time we left the house for the show.
From the moment I got to the venue, however, I felt better.
I sat and listened to Annette Flanagan, as she played a few songs in front of a small but engaged crowd that had come to see her. People that I knew from Higher Ground milled around the square, soaking up the vibe. In the distance I could see Guy Masterson and a few others from the Centre for International Theatre, doubtless relaxing before the commencement of their evening performances. There was a mild buzz around the place, as people emerging from other Fringe shows, or waiting to get in, sat in the beautiful dusk to listen awhile. Others were just happy to be at Shimmering West for the duration, enjoying the weather, food, drink and bonhomie.
By the time I took the stage, I felt so much better. What a tonic this performing lark sometimes can be. I pulled a song out of the hat for a sound check and by the time we'd got it all sorted I was half way through. The song was going well so I decided to press on. So I unexpectedly opened with Where Did You Go? and we were away. The crowd seemed interested in staying, and I felt extremely comfortable chatting from the stage. I worked through a range of songs, choosing whatever I thought would match the mood of the crowd and the banter. I thought I'd have a crack at my brand new song, so What in the World? had its world premiere. It didn't sound too bad.
Day turned to night, and I signed off with Say Goodbye, wishing everyone well as we basked in the splendour of the full moon. I was genuinely, unexpectedly and quite gently urged to do an encore. I was scrambling for ideas but decided to finish with a version of Looking For Something.
The Shimmering West/Higher Ground/Art College/Light Hotel complex captures the spirit of the Adelaide Fringe perfectly. For me, it is the heart of the annual event.
I'd have to go back a long way to find a more enjoyable gig.
Bravo!
www.bleakumbrella.com
Posted by David Robinson at 4:45 PM No comments: 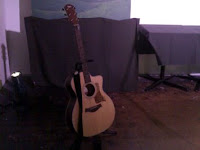 www.bleakumbrella.com
Posted by David Robinson at 6:26 PM No comments: