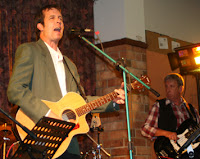 www.bleakumbrella.com
Posted by David Robinson at 11:54 AM No comments:

Play something we know... 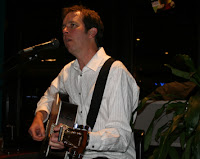 Over the course of the last six months, as I have tried to play as many gigs in as many places as possible, I have found it necessary to take a step back from my almost-absolute commitment to playing original songs. There are some nights where it would be performance suicide to stick slavishly to songs penned only by David Robinson.
I have become, for some shows more than others, a one-man cover band.
Some audiences just don't seem to be interested unless they have heard the songs before.
I guess it comes with the territory, but sometimes people can be more than a little tiresome. I had to remind a couple of tipsy teenage girls the other night that I could be just as rude as they were being. It did the trick.
Depite selling my soul, I have tried to stick to songs I like to sing and play, and I always find a way to get a few originals into the mix. I'll go down fighting.
My repertoire includes songs made famous by Slade, Paul Weller, Hank Williams, Joy Division, The Beatles, Alistair Hulett, Gerry and the Pacemakers, Billy Bragg, Warren Zevon and a host of others. It's actually quite good fun, working through my list. And, of course, all my covers are recorded on my APRA forms.
Its also been a bit of a learning experience too - getting an insight into other songwriters' structures and melodies. It will probably (hopefully) improve my own efforts.

I still play original-only sets and gigs, but I suspect I'll be playing covers at certain venues for a while yet. Damn filthy lucre!

www.bleakumbrella.com
Posted by David Robinson at 11:00 AM No comments: 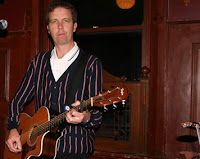 It's been a busy time. Over a nine-day period that ended yesterday I played ten times, incorporating some 257 songs.
I've appeared at the Irish Club, the Daniel O'Connell, the Adelaide Showgrounds Farmers' Markets, the Metropolitan Hotel, Tarlee Community Markets, SCALA @ Higher Ground, the Goodwood Park Hotel, the Regency Tavern and the Semaphore Music Festival.
Highlights included my first festival gig, Central Districts' James Gowans leading the choir in Living Next Door To Alice (and others), performing in front of the smallest SCALA crowd ever, playing Greetings To The New Brunette a couple of times, and getting paid.

www.bleakumbrella.com
Posted by David Robinson at 3:50 PM No comments:

Technically, this was my first-ever festival engagement. Hooray for me.
A one hour spot on the so-called 'Buskers' Stage' at the Semaphore Music Festival. No busking, and not really a stage either. It was, more or less, a repeat performance of the show I'd done down there a couple of weeks' earlier.
The streets were pretty quiet. I think the windy, drizzly weather, combined with the AFL Grand Final, might have kept people indoors. Nevertheless, I gave it the usual mach schau and those that came to watch, and those that strolled by, seemed to like what they heard.

If the right cards fall my way, I hope to impose myself upon music festival life a little more solidly in 2013.

www.bleakumbrella.com
Posted by David Robinson at 7:07 PM No comments: 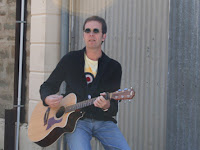 www.bleakumbrella.com
Posted by David Robinson at 9:45 PM No comments: