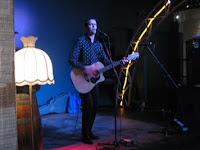 www.bleakumbrella.com
Posted by David Robinson at 9:52 PM No comments: 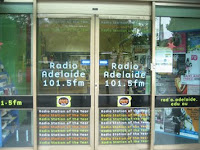 I did a little spot on Radio Adelaide last Saturday. It's usually a pleasant way to spend a little earlymorning time, talking about oneself and playing a couple of songs, and this experience was no different.
Not a great deal of talking this time around though; what I did have to say was squeezed between two performances on the 12-string. I think the broadcast was running behind schedule. Suits me, I don't generally have that much to say in any event. Well, I guess I do, but who wants to listen to the ramblings of a vaguely intelligent but definitely different individual?
As well as playing Shining Light, I debuted a brand new song called I Never Noticed. I blogged about this song, thinking it was finished, over a year ago. Well, after numerous rewrites and rearrangements, it is written now.
I think I'll play it live next week. I hope someone notices...

www.bleakumbrella.com
Posted by David Robinson at 7:23 PM No comments:

I spent yesterday afternoon back at Red Brick, putting what I hoped to be the finishing touches to the Yours Truly album. I was dog-tired when I got there, and there was no glamour or romance about the process. Anthony is a great guy, and the studio is one of my favourites, but there's no joy in listening to the same short phrases being repeated, ad nauseum, in an effort to get them sounding right. All I wanted to do was finish...
On and on we went; I guess it was a credit to us both that we didn't just pull the pin and have a beer. I still felt like crap, but discipline was my co-pilot.
Whatever my feelings, it was with a great sense of satisfaction that I, some hours later, walked out of the studio with a finished and mastered CD in my bag.

www.bleakumbrella.com
Posted by David Robinson at 11:39 AM No comments:

On Tuesday and Wednesday of this week I was in Melbourne. I went across, with a mate, to see Noel Gallagher play at The Palais Theatre in St Kilda. Sure, I could have seen him do a set in Adelaide at the Big Day Out, but the gig would have been of a much shorter duration and I would have had to contend with Soundgarden playing at the same time on the other stage. So it was off to Melbourne...
The concert was brilliant. A reasonably well-oiled and expectant crowd packed the sold-out Palais, and (It's Good) To Be Free welcomed us all to the show. After a couple of songs Noel invited everyone to stand up. Everyone did, and stayed standing until the gig was done. I guess you don't mess with Noel; even the mellow 45 year-old version knows what he wants, and expects to get it.
The set was evenly split between songs from the new album and timeless Noel classics, made famous by that other band. The High Flying Birds' album is great so I wouldn't have cared if he'd just done new stuff, but I was happy to hear Whatever, Talk Tonight, Half the World Away and the rousing Don't Look Back in Anger, a fitting closer.

Seemingly, the entire audience was happy to sing those last two out loud. Without being asked.