It's been an extremely busy time since the middle of the year. I'd decided that I was going to seek out as many opportunities to play as I could, rather than sit around lamenting the dearth of venues willing to take a gamble on original music. Of course, I figured that I'd have to make some compromises in terms of what I would play, and the type of venue I'd play at, and the amount/type of consideration for which I'd be happy to play...

Since winding myself up and heading out I've played on trains, in cafes, in pubs, under marquees, at markets and in halls. I've played in the Northern Territory, New South Wales, Western Australia and South Australia. I've played when I've been feeling happy, sad, energetic, tired, ill and workman-like. I've played for decent money, for pizza, for train rides, for beer and for free. I've played in front of big crowds, and to empty rooms. I have played.
By my reckoning, I've done 64 shows in 135 days since July 1.

I'm a bit tired, what with a day job also requiring some attention, but this is exactly what I planned to do. It's all part of getting myself set up for 2013.

www.bleakumbrella.com
Posted by David Robinson at 8:01 PM No comments:

Up the (Bondi) Junction 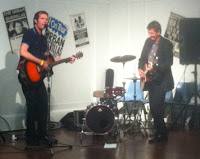 A quick jaunt over to the east coast for a surprise birthday party.
Ken Stewart, Urban Guerilla and Yours Truly stalwart, is having a big birthday so I'm off to Sydney.
Up early on a Saturday morning. I could do with a couple more hours rest but that's the price I pay for loving you the way that I do.
Adelaide Airport. Under construction.
Security. No drugs, bombs or nail scissors, thanks very much.
Exit row seat - bonus. And why not? I'm six foot three. Thank you for noticing, Virgin.
An hour late out of Adelaide, 45 minutes on the tarmac in Sydney. Some kind of worldwide computer glitch. Millenium bug I reckon, just a bit late. Take your time, I can stretch my legs out and carry on reading.
Sydney airport is heaving, full of grumpy, impatient faces. Glad I'm heading in the other direction...
Train into city. Central. Banana skin on seat. People are so considerate.
Lunch. A burrito the size of a football. Pure Blonde.
Freddie Flintoff and Bill Tarmey (died this morning, RIP Jack Duckworth) autobiographies. Seven dollars well spent. Backpack now full. And heavy.
Train to Bondi Junction. A thirty minute walk through the local area. Allsorts around here. Bondi Pavilion.
Help with the party set up. Tote those tables, lift those chairs.
People filter in.
Memory Lane.
Ken is surprised. That's the thing about surprise parties...
Friends and family feel the love. Musical tributes. Ken joins me on stage - you can't keep a good man down. Folk punk is the new black.
And then, it is over. Remove posters, stack chairs, say goodbye.
A couple of hours' sleep. The morning sun hurts my gritty eyes. Airport. Fly. Finish my Wreckless Eric book. Arrive home.

www.bleakumbrella.com
Posted by David Robinson at 8:11 PM No comments: 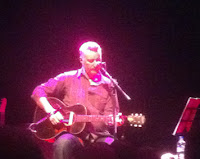 www.bleakumbrella.com
Posted by David Robinson at 10:03 PM No comments: 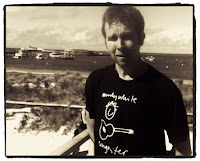 My transcontinental train adventures continue. I rode the train from Adelaide to Perth last week, playing and singing my way across the Nullarbor Plain. I left on Sunday, after playing at the markets for three hours in the morning. Packing for the trip was a bit of a rush!
I've enjoyed a few days of leisurely holidaying in the city - my planned performances fell through - and I got to see Billy Bragg play. But it's back on the Indian Pacific today.
After an unexpected sabbatical, I will be playing six-eight shows over the next couple of days. This will complete my north-south-east-west traverse of the country.

www.bleakumbrella.com
Posted by David Robinson at 11:42 AM No comments: