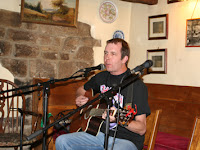 My second performance in England was at the iconic Holly Bush Inn in Makeney. The pub was recently featured on Tony (Baldrick) Robinson's series 'Walking Through History' and is a popular place for locals in search of decent real ales and/or a top-notch Sunday lunch. It is quite close, about five minutes' walk, from another of my favourite Derbyshire pubs, The King William in Milford - so it means I get double the fun whenever I visit the area...
I saw an advert for a Thursday night spotlight evening as I left the pub after enjoying an Easter Sunday pint, so I quickly fired off an email when I got back to my digs. "Can I play?"
Sometime on Monday, I got a response. Affirmative.

We caught a taxi down on the Wednesday night. If anyone needs a taxi in Belper or nearby I can recommend Steve's Taxis. Nice car, top fellow, fair tariff.
We got to the pub and I ordered a beer, as you do. A real ale named 'Halcyon'. It wasn't until I'd paid for it that I realised it was a strong one - 7.4%
"This is like wine", I said to the barman.
"Yeah I know, I probably should have pointed that out..."
I nursed my pint for what must have been a world record duration. The chap running the venue, Howard, was a nice guy and kicked things off with his take on a few timeless classics. A bloke named Gordon assembled what he called a Djembe from some pieces of wood stored in what I thought was a laptop case, and he provided accompaniment for performers, if they wished. Very good it was, too.
The small room filled with performers and punters of all ages.
When it was my time, I explained to my new mate Gordon that he wouldn't know the songs, but I thought he'd manage them without any danger if he wanted to play along. Gordon nodded in a quietly confident manner that suggested I'd not needed to say anything.
I did my set, calling (once again) on songs I've known and loved for years. I didn't have the luxury of rehearsing so it was a case of diving straight in with another borrowed guitar. I managed to get through my short set without resorting to making up lyrics or fudging chords. I guess I know my songs pretty well these days. Somebody has to, I guess...
I'm not sure if it was the novelty of coming from 12,000 miles away (as introduced) or something else but I went down a treat. Again.
We hung around for a while afterwards and watched a few more of the performers. I drained my Halcyon and plumped for a pint of the exotically named 'Jesters Ferrett' - a much gentler 3.6% abv.
It was a shame to leave but time waits for no man, nor does a late night cab booking. As we rose and made our way towards the door my understated attempts at saying farewell and thanks were trumped by spontaneous applause and wishes of goodwill from all and sundry. One lad yelled "Epic!" and I knew my night had peaked.
Well played, Holly Bush. I hope to see you again soon.

www.davidrobinsononline.com
Posted by David Robinson at 5:15 PM No comments: 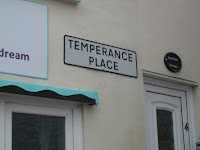 One of the joys of visiting England is the opportunity to drink a decent beer or two. I am a fan of real ales, from the cask, and here is my 2013 list.
This does not include repeat beers in the same pub, but does include repeat beers in different pubs. If you know what I mean.
There's one beer on the list that wasn't a real ale. See if you can find it.

www.davidrobinsononline.com
Posted by David Robinson at 9:04 AM No comments: