The Labour Day long weekend often throws up a fair bit of work for me and this year was no exception. It proved to be the culmination of a couple of busy weeks.

On Friday night I sang and played on stage as part of my role as an Ethelton Entertainer. I also played in the show band. The Entertainers are a variety troupe that raises money for Camp Quality and also for the local school. As well as crooning, I get to play bass for a couple of weeks; a rare thing these days.

On Saturday  afternoon I played a show under a marquee on Semaphore Road as part of the fabulous Semaphore Music Festival. It was all pretty informal but it was loads of fun. I didn't quite know what to present to the mixed bag of punters so I just did my thing. Nobody threw anything at me so I guess it was a decent enough selection of songs.

Saturday night saw me complete my Vaudevillian duties as we wrapped up the nine-night season of the Ethelton Entertainers. So long, farewell, auf wiedersehen, goodbye...

On Sunday morning I rose after four hours' sleep and ambled down to the Adelaide Showground Farmers' Market where I sang my heart out for three hours, looking at the world through gritty eyes. It's a great vibe but I probably should have plumped for a lie-in instead. Oh well, I can sleep later.

From there it was back down to the Music Festival for a gig at Semaphore Garden & Pets. It sounds like a weird place to present music but it is actually a lovely environment. Tropical birds and brightly coloured hens wandered around as I ran through my hour-long set in front of a few friends and some passing plant-oriented patrons.

On Monday we took a trip out to Tarlee where I played two brackets for visitors to the Annual Community Market. I rattled out an hour's worth of originals before switching locations and belting out a stream of hits from the fifties onwards for a couple of hours.  I seemed to prove quite popular; not least with the flies. Summer comes quickly once you head north.

Nine shows in seven days. Keeps me out of mischief I guess...

Posted by David Robinson at 5:50 PM No comments:

Is there something wrong with me?

The personal highlight of the year thus far, musically speaking, has to be my success in SCALA's Festival of Original Music (FOOM) competition. I entered one song in one category - the prestigious Live section.
The song in question, "Is There Something Wrong With Me?", is my newest composition, and I had a bit of faith in its worthiness. But would others feel the same?
I entered, hoping simply that I would get through my heat, if for no other reason than to have something with which to update my songwriting CV. 1997 is starting to look like a long time ago.
The heat went pretty well, I enjoyed performing the number, and the judges obviously saw enough merit in the song to place it in the Grand Final. I was pretty chuffed, to say the least.
My guitar, unlike many others I hear about, has never responded poorly to new strings so I replaced mine on the day of the Final. I switched back to using lighter gauge strings - for the previous few months I'd been using slightly heavier strings that I'd snapped up cheap from Allans when it looked like the store was going under. I'd finally run out so I took a walk down to Derringers. I thought I'd revert to my usual 11-52s.
On the night of the Final, I waited patiently to play. I was lucky number 13. There are so many things to set nerves jangling; is it better to perform earlier or later in the evening? Who am I following? Who is on after me? I actually think that these things rarely matter or, if they do, they can work for you as often as against you.
My time came. I played my song and, despite feeling pretty relaxed and happy about the whole affair, the guitar sounded pretty odd. I repeatedly failed to nail one of the chords in the chorus; strings were ringing everywhere. I should have spent more time getting used to my reversion to lighter gauge strings - I thought that I might have shot myself in the guitar. Oh well, there's always next year. Or the year after...
After the 16 performances were done, the judges retired to deliberate while the big crowd was entertained. Then came the raffle draw, then the announcement of the winners in all of the other categories, then the big one.
When I wasn't named in the three "Highly Commended" acts, I figured it was over. The judges then announced that they had selected three winners, and I almost fell off my chair when I was the second person named.
I felt surprised, honoured and over the moon. It was all a little unreal. It took a few days for my feet to touch the ground.
Being a FOOM Live winner is something I will remember forever. Thanks to all concerned.

www.davidrobinsononline.com
Posted by David Robinson at 5:32 PM No comments:

I bought the Honda back in 1984 when I moved into a very dodgy block of flats in Brooklyn Park. The denizens were desperados; many were up to no good. Each night, as I tried to sleep amid the cacophony of breaking glass, yelling and burnouts, I worried about my cherished ex-postie 1977 Vespa 150 Super. I'd owned the bike for three years and nurtured her back to health after a crash one Friday night on Seaview Road. Adorned with mirrors, chrome and aerials, the Vespa was a perfect target for vandals as she sat under the shared carport. Scooters weren't part of normal culture. I feared the worst.

After a month or two of living at the new place, it was with a heavy heart that I decided that it was best for both me and the Vespa if we went our separate ways. I sold the Super on consignment at Sharp's Motor Cycles in the city and asked the affable owner, Bert Sharp, to see if he could source me a motor bike. He came up trumps with a near-mint 1979 Honda CB 250T.
I rode the new bike home at about 30 kmh; it was a whole different concept to riding the Vespa. I wondered what the Dickens I had let myself in for. Gradually, though, we became friends and everyday companions.
The Honda stayed with me, through times of constant use and times of absolute neglect, and it is to her credit that she is still here.

A few years back I decided that the time was right to rekindle my love affair with scooters and, after getting lucky through some friends of friends, I managed to pick up a 1963 Vespa 150 GL. It looked pretty rough around the edges, resplendent in hand-painted purple and grey livery, but it was in pretty good condition overall. Many months, and many dollars later, the restoration was complete and the GL looked just as she would have when rolling off the production line back in '63.

They don't get a lot of use but they do get a lot of love. A quick ride around the local area is about the best we manage these days. None of us are getting any younger. The arrangement seems to suit us all, and I expect our relationship to endure.

Just don't ask me to choose.

www.davidrobinsononline.com
Posted by David Robinson at 4:10 PM No comments:

A period of consolidation 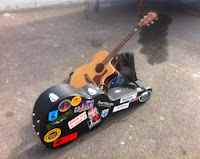 Since arriving home in mid-June after completing my most recent trip, playing songs on The Overland, I have very much enjoyed the experience of staying at home - or at least in Adelaide. It's fair to say that I'd had enough of traveling, as mind-broadening as it might be, and all I wanted to do was stay at home for a while. And so I did. I've assumed the dual roles of man about the house and musician-for-hire. It's been fab.
Each day has seen me add another dimension to this new regimen. What started as something of a holiday had evolved into days spent with a full program of work. My willingness to embrace the (Tom and Barbara) Good Life has had me learning, planting, harvesting, cooking and baking. There's been plumbing, stacking, building, keeping fit and the art of motorcycle maintenance too.
I've played loads of shows and, as is fitting for a man with a "never say no to a show" policy, venues have come in all shapes and sizes. Pubs, football clubs, restaurants, markets, bowling clubs, Race Day marquees and more. The most unusual of all my shows was down at the South Road Superway Open Day. I was playing in the middle of the road, entertaining all those who came to walk a stretch of Adelaide's latest engineering marvel. Thankfully the only vehicular traffic was the odd golf cart, ferrying VIPs and/or the infirm from one spot to another.
I've also been into Shabby Road, my home studio, and helped a pal record the theme tune for his podcast. It was great to get back behind the wheel and learn a bit more about the recording process as I went along. And I got to play banjo on a recording for the first time. Regrettably, I couldn't quite work the Stylophone into the mix.

Hello! Hello! It's good to be back.

Posted by David Robinson at 3:08 PM No comments: