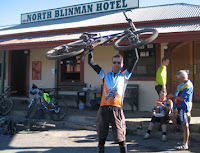 www.davidrobinsononline.com
Posted by David Robinson at 6:54 PM No comments:

The second chapter of the 2013 Odyssey was a vast improvement on the first. Not only was I feeling better, fitness-wise, but the weather was a significant improvement on what had come before. My back had improved considerably after the rest day.

The ride from Burra to Hallett was long but enjoyable. Close to 100 kilometres, with the last stretch being the toughest, but I made it without drama.
The short burst to Spalding on Friday was fun, even the massive climb up through the wind turbines. I had a sense that my body and brain had clicked into gear.
Saturday's ride to Laura was also pretty good. Ups and downs, in and out of the Bundaleer Forest, and some sketchy stuff early.
On Sunday we enjoyed another sunny day as we made our way to Melrose. A shortish day, but with some decent climbs on the way into Melrose.
On Sunday night I spent a couple of hours with my guitar entertaining those who were happy to sit around the campfire. It was a late night, but my performance went down well.
Monday was a rest day. I slept in until 9.20 and missed breakfast. A day of chores (not many) and rest... All very pleasant.

www.davidrobinsononline.com
Posted by David Robinson at 8:03 PM No comments: 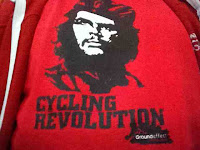 I was a long, long way from being anything like prepared for this year's Mawson Trail adventure. Overseas travel, the associated jet lag, a head cold and a cracked rib conspired to put paid to any plans I had about getting fit.

The first four days were pretty hellish for me. Due to bushfires we (somewhat thankfully) dodged the Castambul climb on Day One but still endured some decent bitumen ascents through Kangaroo Creek and also on the approach to Lobethal. It hurt.
The second day was the usual hell on wheels. The middle stretch of the day, on the way to Steingarten, was very tough. As was the undulating ride into Tanunda after the super fast downhill. I was very happy to see camp. That is the understatement of 2013.
Day Three was filled with mud, rail trails and some decent riding into Riverton. I was still struggling to find my lungs and my legs. It was all about getting there.
The ride to Burra on Day Four was OK. More mud, rain, climbing and a bitumen detour. My back also decided to play up which was exactly what I didn't need. It's an old injury that barely affects me these days but, if it does, it is generally when I am riding.
The rest day wasn't good. My back felt terrible and I thought I might have to go home. I decided that I would try and tough it out and visit the pharmacy. I placed my faith in drugs. I went to bed hoping that I'd feel better for Day Six.

www.davidrobinsononline.com
Posted by David Robinson at 8:13 PM No comments: