Eat (and drink and play) at Joes. 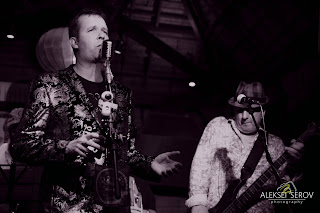 Getting to our two-day engagement at Joe's Cafe in Mui Ne was a bit of a challenge, but it was just about worth it. The vehicle that took us there from the chaos of Ho Chi Minh City was a "bed bus", where travellers insert themselves into a plastic coccoon and sleep away the journey. Fine if you are five foot tall, not so good if you are a long streak... needless to say, a little ingenuity was required.
Joe's Cafe is owned by a laid-back American guy called, erm, Joe. From a humble beginning, he and his wife have been improving the business for a few years, and Joe's is now in a new location, and they have added a boutique hotel just down the road. 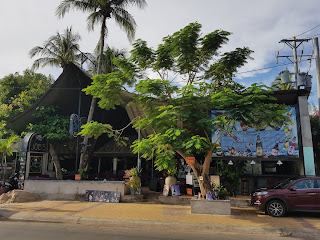 We played two shows on consecutive nights; both went well, despite me only having half a voice (head cold). We were supported by two of Joe's favourites: keyboard virtuoso Kreed (thank you for the vodkas) and the friendly and very talented Clive Pendock.
We had an amazing photographer, Aleksei Serov, come to our shows (see top image), and he also offered to do a photo shoot by the beach. The results of his efforts were excellent.
These were tour gigs number five and six and, musically speaking, I think the band is sounding pretty good. Joe's gave us a five-star review, and comments from patrons were very complimentary. 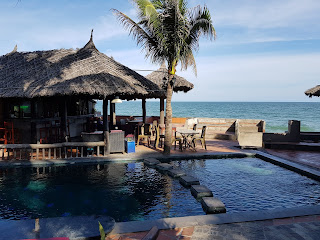 As much as I enjoyed the evenings, the relative serenity of our one free day was also a highlight. Sitting in a deck chair, looking out onto the blue-green South China Sea, across to where Bhutan and Sarawak would be if I could see that far... Lost in thought, pondering nothingness.

www.davidrobinsononline.com
Posted by David Robinson at 10:29 AM No comments: 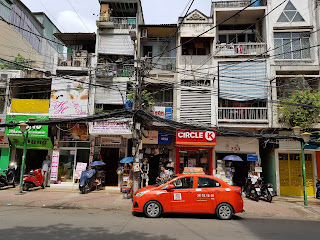 I've been in Ho Chi Minh City for a week or so. Most of the band arrived in the early hours of Monday 19 June, slightly worse for wear after two plane journeys that were separated by a lengthy delay.
For some of us, it's our first time in SE Asia and it has been an eye opener.
The pungent aromas (some more pleasant than others) are often overwhelming, the seemingly lawless approach to road use is something to behold, and the local folks we have met have been mostly very pleasant and helpful.
To say the pace is hectic would be an understatement. Everywhere you look, people are racing in all directions; residents, workers, hawkers, beggars, thieves and tourists. Like bees in a jar.
The city blends ultra-modern skyscrapers, colonial buildings and decrepit shanty towns to form a working and living enviroment the likes of which I have never seen before. Except in Bladerunner.
And, amid all of this chaos, the Buddha is everywhere.

www.davidrobinsononline.com
Posted by David Robinson at 12:15 PM No comments:

Bad Day on the Bike. 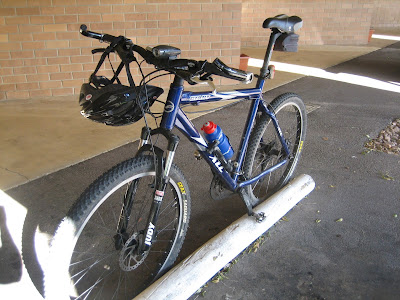 Three reasonably fit men. Three days mountain biking on the Mawson Trail. Meticulously planned. What could possibly go wrong?
Wednesday held all the portents of another day in paradise. Sunshine, birdsong and a cool breeze helped to make Day Two of our scheduled three-day mountain bike ride look like it was going to be a belter. The day began like so many others have, shaking off the cobwebs and slowly preparing man and machine. Kapunda had been a lovely host, and now it was time to press on to the unassuming town of Riverton, via a fabulous few hours of trail riding.
We rode off, two of us, out of the caravan park and along the bitumen that would take us out of town and on to Riverton. Despite the previous day being pretty hard on the legs, I felt good. The riding wasn't overly onerous; neither was the legacy of the night before's indulgences.
We rode onto the dirt at Taylor's Run Road, and began the undulating route that I have traversed may times before. After about 20 minutes, I suggested we stop at the top of a hill to take a photo.
I dismounted and took a couple of shots. Then, from nowhere, a dizzy spell hit me like a gunshot. I was down on my haunches and up again before I had much chance to process.
I told Bob what had happened. Weird; probably just one of those moments. We got back on the bikes and rode off. Immediately I knew something was wrong.
There was no strength in my legs. My breathing was laboured. My chest was tight. I got about half way up the next hill and had to get off and push the rest of the way.
"Something's wrong," I said.
I tried again, rolling down the hills and trying, mostly unsuccessfully, to ride up. Deteriation was rapid. After two or three attempts I announced that I didn't think I could go on. That I needed a rest. Within myself, I suspected that this would be the end of my ride.
I was struggling to breathe without making noises, my chest felt like there was a metal band being tightened around it, and my legs were like jelly. It's fair to say I was getting frightened.
I sat on the side of eucalyptus-lined avenue, knowing I wasn't getting up, despite my desire to do so. A couple of motorcyclists went past; I nodded stoically yet mournfully. Here I was, deep in the heart of one of my favourite places in the world, a broken and rather pathetic figure. I gazed upwards through the canopy at the beautiful blue-sky day, and earnestly wondered if this was to be my last. Seriously.
After sitting for probably 20 minutes, we thought it best to ring Rod and see if he could get the car down the track to pick me up. 15 minutes later he arrived, and they put my bike on the back and lifted me up into the passenger seat.
In the interests of full disclosure, but against my usual robust nature, I announced that I wasn't sure that I hadn't had a heart attack, and that I wasn't sure I was going to survive. I didn't want to freak anyone out, but I wanted them to know that I was feeling seriously compromised.
As it happened, I started to feel better once I was in the car. My breathing wasn't quite as noisy, and I was starting to converse. By the time we got to the Kapunda Emergency, I was able to get myself out of the car and speak coherently with the nurse.
The nurse checked my vitals, measured my blood pressure and gave me an ECG (first time in my life I've had my chest shaved). Everything appeared fine. She advised that I shouldn't ride again that day; I told her that there was no chance I would be getting on my bike.
Unfortunately, but sensibly, we decided that it was best to curtail the riding holiday and return to Adelaide.
I saw the doctor, he thought it was oesophagitis, perhaps brought on by the pain-killers I'd been taking for my recovering fractured fibula. It some situations it can feel very much like a heart attack, something to which I am inclined to agree with. My chest was tight for about three weeks afterwards, but both the doctor and the cardiologist have given me the all clear. Two months later, it still gets a little tight when I sing with the band.
Scary.

www.davidrobinsononline.com
Posted by David Robinson at 6:10 PM No comments: