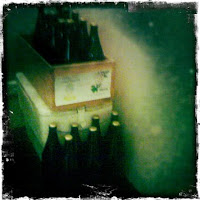 This has been one of the busiest weeks I can remember; so much to do, so little time. Or so it would seem. It's all been good stuff, just too much to do. Still, you've got to keep on keeping on, haven't you?

We bottled our beer yesterday. It looked and smelled like proper beer, so hopes are high for something drinkable. The process was unhurried and untroubled, and we got 26 bottles of Dark Ale from the fermenter.
We enjoyed the whole thing so much, that we put another one in this evening. So we'll most likely be bottling again this time next week.

www.bleakumbrella.com
Posted by David Robinson at 10:01 PM No comments: 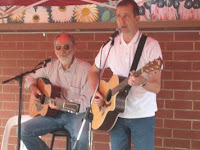 I had a fantastic time playing to the patrons of the Goodwood Christmas Fair on Saturday.
Firstly, it's great to play at a local, community event. It is very pleasing to be doing something for the local area.
It was also great to do a solid hour of originals. I didn't play anything I didn't feel like playing, and still filled the hour easily. No-one threw anything at me; no-one stuck their fingers in their ears. Even the weather was kind.
After the first set, I went and played for another 40 minutes at street level. More fun.
In the afternoon I got back up on the main stage with my good mate Lindsay and we knocked out 30 minutes of our old blues numbers. We were sandwiched between two sets from the fabulous Chris Finnen, which was a lovely way to spend the afternoon. We hung around for Chris' set and had a brief chat afterwards. He was genuinely happy to see us playing the old standards like Hoochie Coochie Man, Key to the Highway and Bright Lights, Big City. We were equally happy watching him play and sing. A truly great guitarist.

I think my next big gigs are at SCALA on December 16 and the Grace Emily on December 28. Let's 'ave it!

www.bleakumbrella.com
Posted by David Robinson at 9:18 PM No comments: 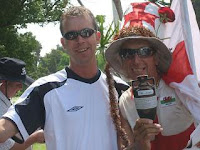 So, here we are again, at the start of another Ashes series. I have mixed feelings when England play Australia. It's great to see the traditional enemies go at it, the cricket is almost always entertaining (even the 2006-7 tour), and no quarter is asked for - or given. But it can be a difficult time for an Englishman in this beautiful country.

It can be very hard work. The concepts of being generous in victory and gracious in defeat are lost on many of my colleagues and, I suspect, upon the general population. Win or lose, I am generally facing a battle to stay sane. I barely talk about cricket with others, such is the level of inanity that goes hand-in-hand with the passion. The newspapers and television are ill-informed, casually racist, and sloppy. Unreadable and unwatchable. And of course, they are the very things that shape public opinion.

All I can hope for is an England victory. At least it will keep the noise down. For a while.

Don't get me wrong - I'm sure that things are similar for the minority fans in other countries too, whether they be in England, Scotland, Pakistan or Zaire. But this is my blog, and these are my thoughts...

Whichever team you follow, whatever your level of interest, I genuinely hope that you enjoy the series. And remember, the bloke over there that you call a "dirty pommy" might just be me. And you would be wrong. I'm rather clean.

Posted by David Robinson at 10:13 PM No comments: 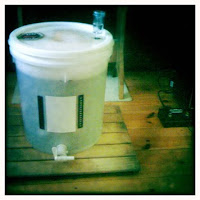 As part of my commitment to improving the quality of life around here, I have recently decided to have another crack at making beer. We used to make it at our old house; at one stage we had hundreds of litres of ale stored in the shed. I can honestly say that I preferred most of my brews to the retail beers.
We never seemed to get going here. I made a few brews, early on, but they got steadily worse in quality and I couldn't seem to work it out. Sick of pouring smelly beer into the compost, I started buying factory beers again.
Yesterday, I cleaned and sterilised all of my old gear, and proceeded to make a brew. I thought I'd had a crack at a dark ale. I'd bought the ingredients a few weeks ago. I took my time over the cleaning, and the brewing, focusing on each step as I progressed. I was hoping for success, but uncertain as to the roadworthiness of my old equipment. Nevertheless, the process seemed to pass without incident.
This morning, when I went and checked, the beer was bubbling away happily.
So far, so good!

www.bleakumbrella.com
Posted by David Robinson at 9:37 AM No comments: 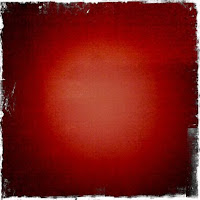 Leonard Cohen played at the Entertainment Centre last night. I was very happy to have snared a couple of tickets for the show. Especially as I had elected not to see him when he was here a couple of years ago; a concert now universally agreed to be the greatest gig by anyone ever. I thought I might have missed my chance...
Luckily, he decided to visit Adelaide again.
We had elevated seats, with the stage to our right, and not too far back. Around 8.00 the lights dimmed, the recorded music stopped, and the band members took their positions. Once the stage was set, Cohen walked onto the stage to a warm, affectionate welcome.
There's no doubting his genius. All you have to do is listen. He could yell his words from the stage and still be magical but the music, and all that goes with it, lifts everything to a higher plane. The band members are just about perfect in both virtuosity and personality.
The show was in two parts, punctuated by an interval and, through the course of the evening, audience members were presented with the songs that they were hoping to hear. It's difficult to select a high point, because it was all good. If I was pushed, I'd say that Waiting for the Miracle and A Thousand Kisses Deep were my favourite moments. After two sets, three encores and a shedload of highlights, this genial 76-year old left us all happy and satisfied.
The whole production was, unsurprisingly, very similar to the 'Live in London' film that is available, and probably owned by everyone who was at the concert. So if you missed the show, you can get a sense of what it was like by looking at that.

Let's hope it's not the last time he chooses to come to Adelaide.

www.bleakumbrella.com
Posted by David Robinson at 5:03 PM No comments: 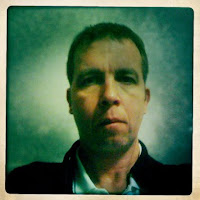 www.bleakumbrella.com
Posted by David Robinson at 3:53 PM No comments: 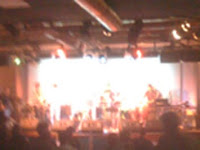 www.bleakumbrella.com
Posted by David Robinson at 9:47 AM No comments: 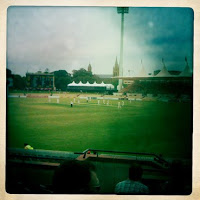 A few months ago I was sitting under cloudy summer skies in Nottingham, watching England rout Pakistan at Trent Bridge. It was a rather lovely time. This was just before the spot-fixing scandal came to light, further sullying the reputation of our friends from the subcontinent.
Today I had the pleasure of seeing England take the field against South Australia, in the second of three Ashes warm-up matches.
Shortly after the Remembrance Day commemorations were done, I made my way down to the redeveloped Adelaide Oval. They have certainly done a terrific job - the new stands look great and they are also very comfortable. I'm afraid that the Bradman Stand looks out of place now, and I expect it will be earmarked for destruction sooner rather than later...
I met and spoke with a few people I knew, shared a beer or two and thoroughly enjoyed my afternoon.
The competitive aspect of the match was almost incidental, although there were a few English batsmen that needed to find form. It was great just to be at the cricket, having a beer, watching England. I enjoyed myself so much that I am going on Friday and Saturday too.

I hope that the cricket gods are smiling on the good guys over the course of what I suspect will be a very even Ashes series...

www.bleakumbrella.com
Posted by David Robinson at 6:59 PM No comments: 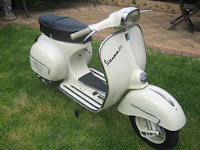 It's been a while, but yesterday I had the great pleasure of taking my beautiful 1963 Vespa out for a spin. Winter, travel and laziness have kept me off the scooter for a few months. The sense of guilt I felt was becoming an issue. In recent weeks, despite being flushed with springtime optimism, I couldn't get the thing to start. I feared the worst.
On Saturday I filled up the tank, looked at the spark plug and gave things a general wipe. I'm not sure what it was, it may even have been the warm sun, but when I ventured to kick it over it sprang into life on the third attempt. A little smoky, but purring nicely. Filled with happy thoughts, I resolved to ride on Sunday.
Sunday was a pleasant, cloudy morning; perfect weather for a spin. I didn't want to venture too far from home as I was concerned that we might get into difficulties after such a long period of inactivity. I needn't have worried. I spent the best part of an hour scootering around the local suburbs. I zigged and zagged through the streets of Millswood, Unley Park, Wayville, Hyde Park and Kings Park, having a great old time. The major roads allowed me to break the shackles of the 40 kmh limits and I was able to push just a little harder on the throttle. I would have stopped for a coffee but I was worried I'd have trouble getting started again. No matter, that confidence will come. It was a great way to start my day. Mods, baby, mods.

I really must do this more often.

www.bleakumbrella.com
Posted by David Robinson at 6:35 PM No comments: