I went along to see Lloyd Cole last week. He was a guest of the University of SA, in conversation with Professor Anthony Elliott, as they explored the topic "On Music: From singles to Spotify". A full-house, featuring many familiar faces, welcomed him to the stage. I was expecting something a little dry, perhaps an academic exploration of the income-generating options available to modern music makers. I got something else entirely.
The 75-minute session was actually a rather delightful journey through Lloyd Cole's musical life, which only rarely dipped into matters of economics. Cole came across as affable, and comfortable in his 53-year-old skin. The tales he told of his relative triumphs and tragedies were relayed with good humour and a sense of complete openness. In short, he seems like a decent chap. 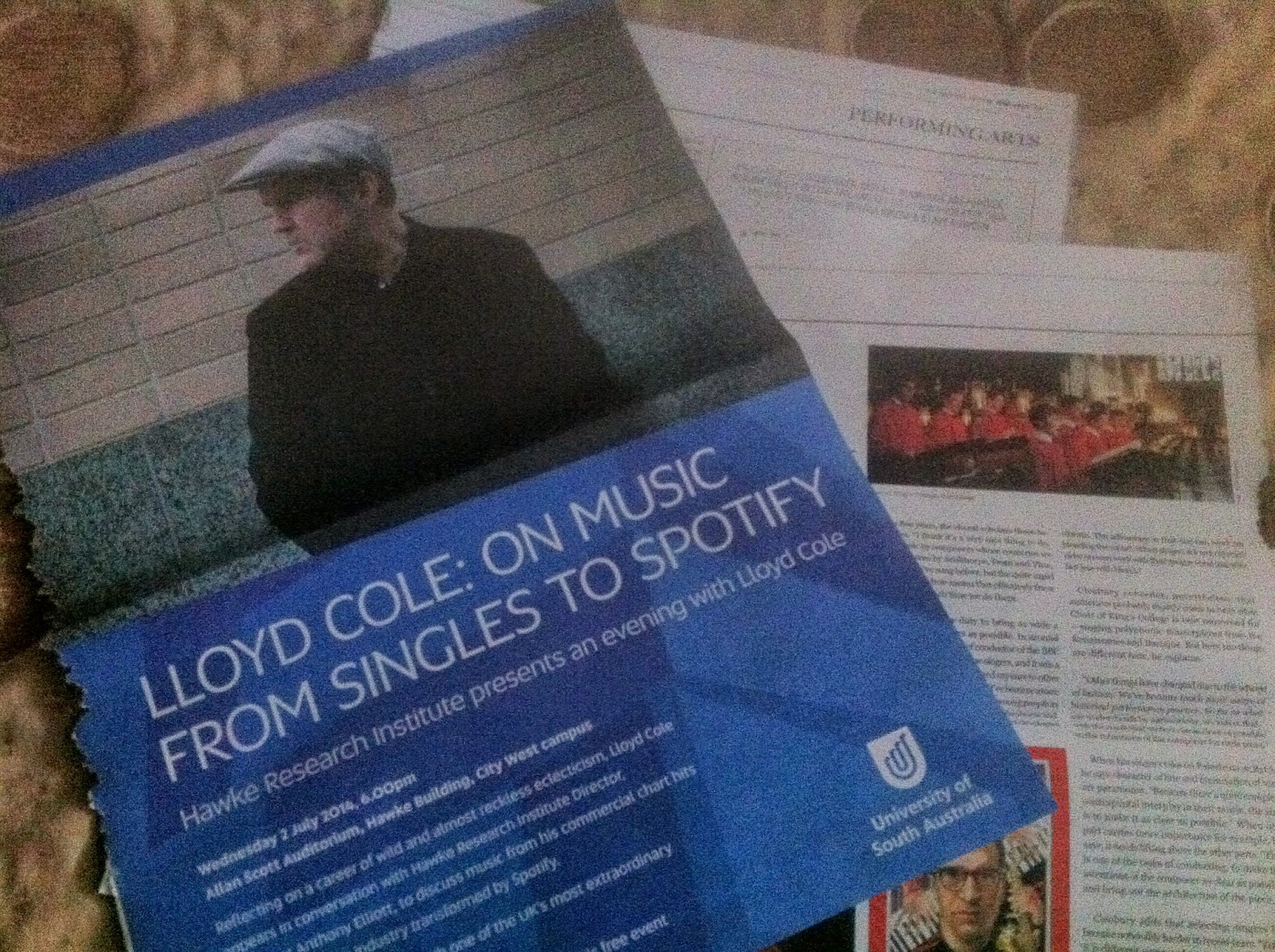 The highlight of the evening, I suspect for most in attendance, was witnessing Cole play four songs from his considerable back-catalogue. His classic 1984 song, "Rattlesnakes" came first, and was welcomed by all. "Undressed" from 1990's Lloyd Cole album, came next, followed by "Music in a Foreign Language" from 2003. The evening was rounded out with a performance of 1986's "(Are You) Ready to be Heartbroken". Each song was warmly executed and rapturously received.
Seeing as he had come all the way to Adelaide, I wondered why he didn't book a gig. On the strength of the turn-out for the conversation, I reckon the Grace Emily would have been packed...
He is coming back to Adelaide at the end of his national tour, but it appears that he's going to spend his time playing golf. His call, I guess.

www.davidrobinsononline.com
Posted by David Robinson at 4:36 PM No comments:

Finger on the Poltz

When Steve Poltz is in town, it makes sense to do whatever it takes in order for you to get to see him. Poltz is a one-off; a one-man melting pot of myriad musical styles and sentiments. Mainly, he's hilarious and irreverent but he is also considered, aware, congruent, hard-working and real.
I was aware of Steve Poltz for some time before I managed to see him. There were a couple of tours where his show dates didn't match my availability. I had a DVD, Live at The Basement, which served as a fairly good introduction to his live show. I also had a few of his records. I've been to a few Poltz gigs in recent years and I have never failed to be impressed.
Last month he played at new incarnation of The Jade Monkey in the city, and I'm confident that his three-hour show impressed all in attendance, new fans and old. His straight-up love songs meshed perfectly with his crazy slices of life eg "Folk Singer", a brand new song. Even the stuff he made up on the spot was consumate. Song after song, from the sublime to the ridiculous, he just kept on going. "Dick's Automotive", "You Were Meant For Me", "Sugar Boogers", "Kicking Distance" et al. Such amazing energy and love for his craft. Part-professional village idiot, part-supremely well-organised showman.
It was just after midnight when we braved the chilly night air; full of the joys of Poltz. I hope he comes back soon.

Posted by David Robinson at 7:18 PM No comments: