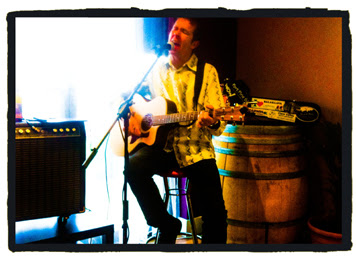 You know that old saying? The one about time passing more quickly as you get older? I'm starting to think it might be true. 2013 has whizzed by, and my year away from full-time work has been an enjoyable and somewhat successful adventure.

The target I set for myself last January was to become a better musician, songwriter and performer. On reflection, I think I did a reasonable, if not spectacular, job.
As far as live appearances go, I played 101 shows. Not as busy as some recent years, but not a bad effort considering the amount of travel I did in the first half of the year. As well as playing in pubs and other venues across the Adelaide metropolitan area, I performed in Blinman and Melrose in the state's north, and also in Tarlee which is quite a way out of town. I played two very satisfying shows in England; one at the Queen's Head in Belper - the same venue that hosted Andy White and David Rovics in 2013 - and the other at the Holly Bush in Makeney, featured in Tony Robinson's Channel 4 documentary Walking Through History only a few weeks later. In keeping with my "Never Say No to a Show" resolution, last year's venues included markets, a racecourse, restaurants, a football club, the Overland train, a garden centre, a bowling club, a country fair and, most bizzarely, atop the new South Road Superway.
My favourite show for the year was probably the Yours Truly gig at the Grace Emily just before Christmas; it was such a good vibe, but there were plenty of other groovy nights.
I can now knock out over a hundred songs without needing to refer to chord charts or lyrics - one of the goals I set myself at the start of the year.
In terms of songwriting, I've made slow but steady progress. There is still, however, much to do. I guess the most noteworthy songwriting moment was being named a joint winner in SCALA's Festival of Original Music Live section with my song "Is There Something Wrong With Me?" .
In my modest home studio I recorded the theme for a musical friend's podcast. I had very little in terms of source material so it was a real challenge for me to turn what was essentially a solo guitar and vocal performance into something that featured bass, banjo, percussion, backing vocals, crowds, drinking sound effects and, erm, goats. I think it scrubbed up rather well. I also recorded a version of "Love Me Tender" for a friend to play at his daughter's wedding. He sang to my guitar guide track, and then left me to it. It took a few days, but he was genuinely moved when he heard the finished product. I hope the wedding was a nice day for all concerned.
I lent my musical services to the Save The Brickworks movement, and also played at a benefit for the Cancer Council. I raised money for the Hutt Street Centre and for CanTeen through my playing and singing.
The latest SCALA CD featured a David Robinson song, "Wish I Was You"; it was my only new release of the year and I am hoping to get more done in 2014. Finally getting around to releasing A Drop in the Ocean and Very Together digitally was pleasing.

www.davidrobinsononline.com
Posted by David Robinson at 10:33 PM No comments: