This is what we wanted.

The main reason we went across to Sydney was to see The Chords, very probably the best band to emerge out of the English mod-revival era. Was it really 30 years ago? Anyhow, The Chords weren't really mods, and didn't present themselves as such. Well, not as obviously as some bands, let's say. They released one cracking album and a handful of decent singles before falling apart in true rock and roll fashion.
Older and, quite possibly, wiser, they have reformed and have been playing occasional gigs here and there for a little while. At the beginning of May they arrived on Australian shores for the first time.
The two Sydney shows comprised a great Saturday night gig at a place called Notes, supported by Australian mod legends Division 4 and new boys from Perth, Hurricane Fighter Plane. All three bands were fabulous. I felt so lucky to be part of it.
With only one album and few other tracks in their canon, it was easy to anticipate The Chords' setlist. The crowd got what they wanted, a set brimming with melody, mayhem and a modicum of middle-aged modernism. There was no Spinal Tap-inspired jazz odyssey, although we were treated to the new single, Another Thing Coming. As expected, the highlight of the evening was Maybe Tomorrow. Rousing, to say the least.
The second show was on board a Sydney Harbour cruise ship, and it went off big style, despite a surprisingly low attendance. The locals should probably be ashamed of themselves. It didn't seem to worry the band or the punters though. Hurricane Fighter Plane once again provided the support, although they went on second. Rumour has it that The Chords wanted to play first so that they could party with the rest of us as the boat took in the sights of beautiful Sydney Harbour. It was much the same setlist, and was met with the same degree of approval.

On the Friday night we'd seen a short set from POPE - Chris Pope's band when he's not a Chord. An unexpected bonus! The Mayday Dreamers also played, and kept us entertained with a mixture of mod and power pop classics.

As with most great times, the weekend ended too soon. Within 18 hours of stepping off the cruise, I was back in Adelaide, reflecting on a great trip east. Such is life.

I brought back some great memories, albums and singles by The Chords and POPE, a DVD, a t-shirt and a gig poster. I'm just a big kid really.

Bravo The Chords, come back soon!

www.bleakumbrella.com
Posted by David Robinson at 4:38 PM No comments:

Gadding about in Sydney 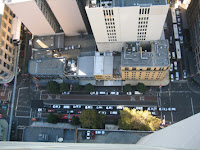 During the daylight hours of our Sydney trip, we behaved like proper tourists. We walked across the bridge, hung around the Opera House, and went to Luna Park. We also strolled, in beautiful autumnal weather, through the Botanic Gardens, visited Mrs Macquarie's Chair, and spent some time at the Museum of Contemporary Art.
We caught a ferry over to Manly, enjoyed a wander to the markets, had a coffee, and came back a few hours later.
We had some good meals, and a few pints. One particularly welcome thirst quencher went down at The Orient, a pub I'd visited the best part of 20 years' ago. Twenty. I'm getting old, of that there is no doubt. I had another Guinness at "Sydney's Oldest Pub", Fortune of War. They had a fellow there singing and playing crowd-pleasers on his acoustic guitar. It reminded me of the job that awaits me on Great Southern Rail.
We stood on the 45th floor of our hotel and admired the views.Because we could.

www.bleakumbrella.com
Posted by David Robinson at 10:02 PM No comments: 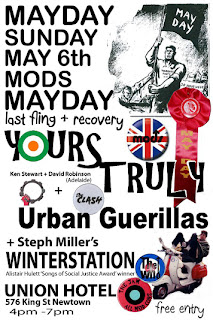 www.bleakumbrella.com
Posted by David Robinson at 11:37 PM No comments: 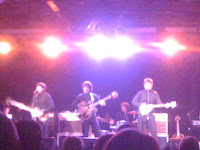 www.bleakumbrella.com
Posted by David Robinson at 2:56 PM No comments: