The leaving of Birmingham. The day began with a bus station visit from Neil Warburton, author of a Dexys book and a fan of PlanB, who asked us to sign a few bits and pieces. We all posed for photos. Neil waved us goodbye from the station, ensuring we got underway safely.
It was a sunny afternoon in the beautiful town of Cambridge when the National Express coach pulled to a halt and we spilled out onto the street. The Cambridge Rock Festival was calling and we were all on something of a high. A biggish festival gig, beautiful weather, and it looked very much like Adrian would be rejoining the band for the show. We hardly noticed the forced march to the accommodation, which took around three-quarters of an hour.
We had the Wednesday night off so, once we were settled, a few of us sat out the back of the B&B, drinking beer and eating tea. I had chips and mushy peas from the inventively-monikered fish and chip shop, 'The Codfather'.
The festival venue was hosting a special concert to precede the weekend's event, a fund-raiser for a local hospital; one that had treated Wilko Johnson while he was ill. There was some discussion about attending, and eventually four of us decided to go and have a look. Peter, Pete, David and Dave piled into a taxi.
The concert had advertised "special guests" and some of us were hopeful that Wilko might do a turn...
However, there was no Wilko appearance, and the bands were mainly classic rock tribute acts (think Creem, Deep Purple), but it was a good night in any case. We met the folks from the legendary Radio Caroline, now an internet radio station, and teed up an interview for the following night. And bought a few ex-Radio Caroline singles. We surveyed the festival site, had a few real ales, enjoyed some tunes, bought our festival t-shirts (with the band's name printed on the back!) and went home happy.

On Thursday morning most of us, either collectively or separately, wandered around the town, taking in the history and beauty of the place. The walk along the River Cam followed by brunch was a personal high point. 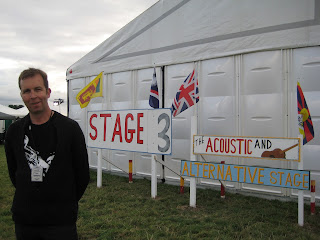 In the afternoon we headed to the festival. It was more of the same; mainly tribute acts and a few reformed bands from back in the day. I got to see Atomic Rooster, a band I remembered from my nascent teenage years. Carl Palmer, Ginger Baker and (I have recently learned) Chris Farlowe are all Atomic Rooster alumni. This line-up was OK without being overly world-shattering.
Pete and I were interviewed by Radio Caroline and we left them with copies of the album, and their promise that they would be spinning tracks across the weekend.
I know it's getting boring, but this was another gig where last-minute efforts saw successful arrival of sufficient gear. So at least we could get on, but it is a situation that always leads to stress and wasted energy. We were the last band on the acoustic/alternative stage, competing for punters with a Pink Floyd tribute show over on Stage One. We did OK for numbers; it was a decent crowd. 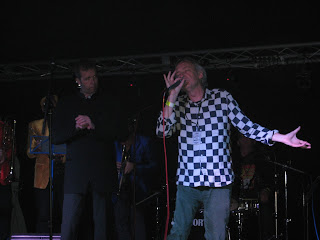 From where I was standing, it was another good show; Patrick, Robbie and Cam once again proved an aural and visual highlight during their feature moments, and it was great to have Adrian back in the mix, both musically and personally. The only downer was that, due to a local noise curfew, we had to finish one song early, so the crowd didn't get to sing along with us during 'Wake Up Call'.
After the show, organisers were very complimentary about the performance and apologetic about the abrupt finish. There was loads of talk about playing again next year!
Never say never.