I spent my Sunday morning in Glasgow with Patrick, shooting more footage for the 'I Know a Girl' film clip. We visited some great locations, including Glasgow Green and the stunning Necropolis. Three hours well spent. Combined with the Birmingham shoot, I think the clip should look great.

Some of us had tickets for a couple of concerts while we were up in Scotland. Justin Currie and Lloyd Cole were playing on Sunday evening, followed by The Waterboys on Monday. Both were scheduled to appear at the Kelvingrove Bandstand, but the Currie/Cole show had to be shifted due to wild weather being forecast.
On Sunday, we headed out to the revised and much smaller venue, determined to get in. Guitarist Peter and I left the others relaxing at the bar while we went to watch the Community Shield in a pub, if we could find one. On the way out, we blagged our way into a conversation with one of the soundcheck guys, who said he'd add our names to the entry list, seeing as we'd come 12,000 miles to see the show. Bonus. We continued our search for football in the pissing rain. After about six or so strikeouts, we heard football crowd noises coming from a pub. "That's it!" we thought. We opened the door and stared straight into a bar heaving with hundreds of Celtic fans looking up at screens as their match reached its climax. I'm glad neither of us was wearing blue. I'm also glad that Celtic won. After the match finished, the publican kindly switched the channel to the Wembley match, and Peter and I watched in relative comfort as the place thinned out ever so slightly.
Despite our names being on the door for the gig, we still stood in line, getting wet. I'm not a queue jumper, I don't like leaving things to chance and we really, really wanted to see the show. Peter went on a food run and brought me back a veggie burger, bless him. Pete and Suoyi were ahead of us in the line, I was about 20 metres back from them, and Peter and Lynn were the same distance behind me. Co-ordinated mobile communications were the key to success. We all got in. I expect everyone else did too.
The gig was fabulous. If I wasn't a Justin Currie fan beforehand, he certainly won me over. Lloyd Cole was as good as I'd expected and hoped, but I can't get Jimmy Carr out of my mind whenever I see him nowadays. 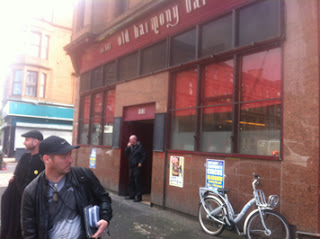 After a slower start to the working week involving another visit to the Necropolis, making train reservations and buying guitar case stickers, Monday afternoon saw Pete, Peter, Patrick and I head out for a radio interview and live to air with Jim McMillan on Sunny Govan Community Radio. We performed 'Cloudy With a Chance of Rain' and the session went well. I wanted to have a beer in Govan so the interview was followed by a visit to the Old Harmony Bar across the road, a proper local pub."The band's here", someone said as we walked in (not sure how they knew, maybe my tambourine was jangling in the bag). "'Scuse me, Fleetwood Mac" said another, as he reached for his pint. The locals were lovely people, chatting away to us about how we'd come to be at their pub. They seemed genuinely interested in our story, except for the quartet of women playing dominoes, swearing like troopers while they strove for victory, oblivious to our presence.
That evening the gang of five swelled to six, as drummer Dave joined us for The Waterboys gig. Another trip across town in a taxi. We lined up outside the ticket collection box, enjoying a beautiful mild summer's evening. How things can change over the course of 24 hours. 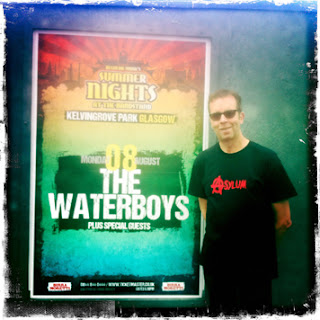 The Kelvingrove Bandstand is a medium-sized outdoor amphitheatre, and it was a just about perfect setting. We sat, then stood, and Mike Scott and his crew put on a brilliant show. It was the first time I've seen The Waterboys live; I sincerely hope it's not the last.
After the show, we managed to beat the rush for a taxi by booking one to arrive a little way away, near a quiet suburban pub. Even that one was almost hi-jacked by another group. Not on Suoyi's watch!
We arrived back safe and sound at the Tartan Lodge; I slept well on my last night in town.
All up, my trip to Glasgow was great. I wasn't sure what to expect from this colourful, multi-faceted city, but just about every interaction I had was positive, every dumb question I asked was answered helpfully, everyone involved with the gig was great, and everybody else I met was friendly. Nothing seemed to be too much trouble for anyone. Thanks to all concerned.